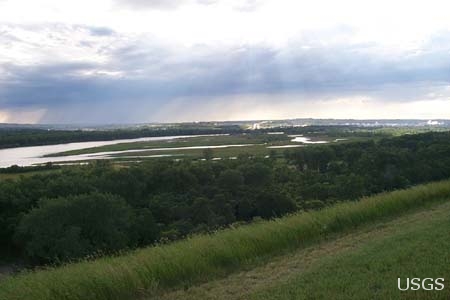 The region’s river researchers will have a day to present and discuss their findings at USD Thursday.

The annual Missouri River Institute Symposium, a collection of speakers who’ve dedicated their studies to the Missouri River, will be held in the Muenster University Center from 9 a.m. to 5:30 p.m. Thursday.

Speakers from USD, along with state and federal agencies, will discuss flooding, hydrology, sedimentology and river management, among other topics.

Floodwaters have barraged cities and towns lining the Missouri River since March, and Gavins Point Dam in Yankton is releasing 80,000 cubic feet per second — its maximum amount — into November, 30% higher than its average winter release rate, the Omaha World-Herald reported.

“One of the most important features of the symposium is its interdisciplinary nature, which encourages new and broader ways of thinking about the river and its management,” said David Swanson, Ph.D., director of research for the Missouri River Institute in a press release. “Few venues bring such a broad variety of stakeholders interested and involved in Missouri River issues together in one place.”

The Symposium is free and open to anyone. The schedule can be found at https://www.usd.edu/missouri-river-institute/research-symposium.