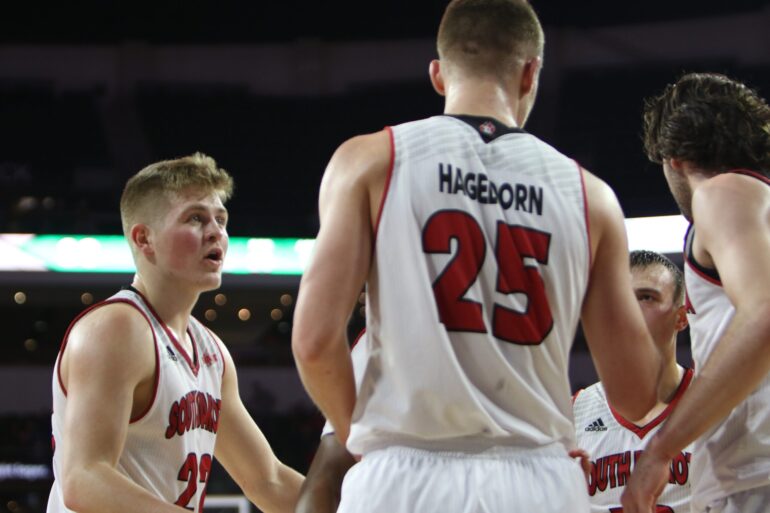 Men's Basketball
Senior Tyler Peterson, along with Seniors Tyler Hagedorn, Cody Kelley and freshman Hunter Goodrick, huddle up after a foul during Sunday's quarterfinal against UND. Madilyn Sindelar | The Volante

The Coyotes men’s basketball team led by 11 points in the second half, but went cold for the last five minutes to drop their quarterfinal game of the Summit League tournament to North Dakota 74-71 Sunday night.

“To start the game, I felt like we were in and out of possessions a little bit too much,” USD head coach Todd Lee said.

Eventually, the Coyote offense started to warm up and cut the lead to five at 26-21. USD took the lead at 35-34 with 2:02 to play. Hunter Goodrick hit a pair of free throws to cut take the lead and cap an 11-0 scoring run for USD.

Tyler Hagedorn converted an and-one opportunity with eight seconds left to tie the game at 38 headed into halftime.

The Coyotes opened the second half on a 7-0 run in the first two minutes to lead 45-38. The lead grew to 11 with 15 minutes to play.
buy diflucan online https://www.epsa-online.org/wp-content/languages/new/prescription/diflucan.html no prescription
With 11:22 to play, USD led 60-50. Nearly three minutes later, the USD lead was four points at 60-56.

The Coyote offense went cold again for the final five minutes of the game. USD’s 69-60 disappeared as UND went on a 10-0 run to take a 70-69 lead. USD tied the game at 70 and took the lead with a pair of free throws by Tyler Peterson with 70 seconds left. Marlon Stewart got a one-on-one with Stanley Umude with 15 seconds left and hit a mid-range jumper after getting Umude off balance to give UND a 72-71 lead. Stewart said Umude was someone they wanted to attack, but Lee said he wanted Umude on Stewart in that situation.

“We wanted to pick on the right match-up,” Stewart said. “I just made a play and my teammates and coaches trusted me and I trusted them.”

On the ensuing Coyote possession, Peterson got the ball and drove to the basket, but missed the layup attempt and was called for his fifth foul with 2.8 second on the clock. Crady Danielson hit both free throws and Triston Simpson missed his last second shot from near half-court, giving UND a 74-71 victory.

“That’s a shot I work on seven days a week,” Peterson said. “I feel good about it, I’d shoot it again.”

Hagedorn led the Coyotes with 17 points and eight rebounds. Umude pitched in 15 points and Peterson 14. Cody Kelley added 12 points. The Coyotes were called for 27 fouls and UND 21.

Nov 11th, 20220
The Coyotes had their first home game of the season against Lipscomb last Wednesday. The Coyotes dropped...
Read about: Best Detox Shampoos for Hair Drug Test and Synthetic Urine and Fake Pee manual
© The Volante 2015. All rights reserved.