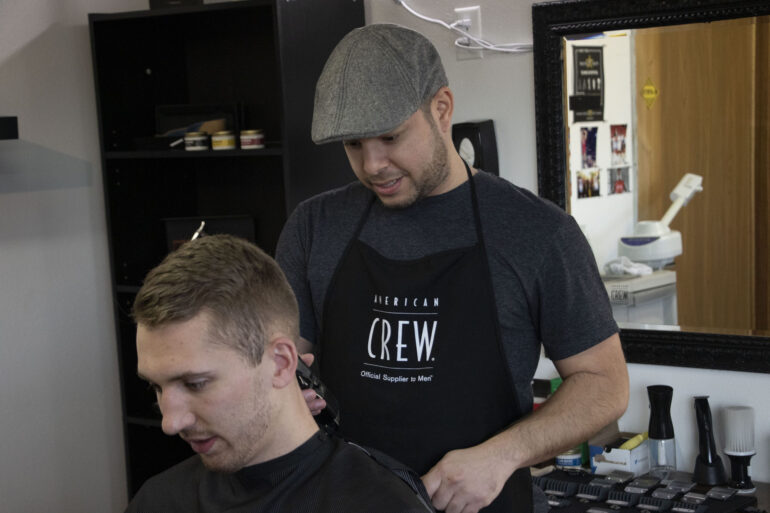 While salon’s like https://scoutsbarbershop.com/ are popular now, so is this story.Joel Antonio, owner of 5 Star Barbershop, said he wanted to bring his community together in an unconventional way.  As a kid, barbers were all around Antonio, but he didn’t really find an interest in cutting hair until he moved to Vermillion.

He said he transformed an idea to satisfy his and other people’s needs in the community into an actual business.

“I came to South Dakota by way of my wife who is Native American and from the Lakota Sioux Tribe,” Antonio said. “When I first moved up here I quickly noticed there wasn’t really a barber who catered to my needs. That’s when I decided to take it upon my own hands, literally.”

Antonio began cutting hair in 2017. Word began to spread around Vermillion and the surrounding areas about the new barber cutting hair for free. Through Facebook and Instagram, Antonio promoted his work and people began to take notice.

“Really quick and early I caught a good reputation for my skills all while I was on the waiting list for barber school,” Antonio said.

He said he had a positive experience at school, but people in Vermillion didn’t forget about him while he was gone.

“I would still get messages while I was in barber school in Fargo from people back in Vermillion to cut their hair,” Antonio said.

Antonio spent a year and a half in barber school and said he met good people and learned a variety of skills from his teachers.

“I ended up learning a lot from my instructors,” Antonio said. “I learned traditional barber skills along with new techniques. New school techniques such as creating designs on the scalp, razor fades, etc.”

Tyler Hagedorn, an Coyote basketball player, got his hair cut frequently before Antonio left for barber school. His relationship with Antonio spans back to when he was a Sophomore in college.

“Me and my friends went to his apartment and got cuts there but when he left to get his barber license, we all were missing him a lot,” Hagedorn said. “Finally Joel came back after barber school and opened 5 Star Barbershop. Ever since then I’ve been getting cut by him.”

One of the things barbers are taught, Antonio said, is to have a good relationship with their clients. They need to be receptive to a client’s needs or wants when it comes to their hair. This is something Antonio said he prides himself on.

Seth Jones, a USD swimmer, found out about Antonio through his teammates. He said he can tell how much Antonio cares about his clients and how they look.

“Joel puts a significant amount of care into the haircuts he gives. He is sure to make it perfect under his and your own standards,” Jones said. “He compliments the haircut constantly and asks if there is any way he can do better.”