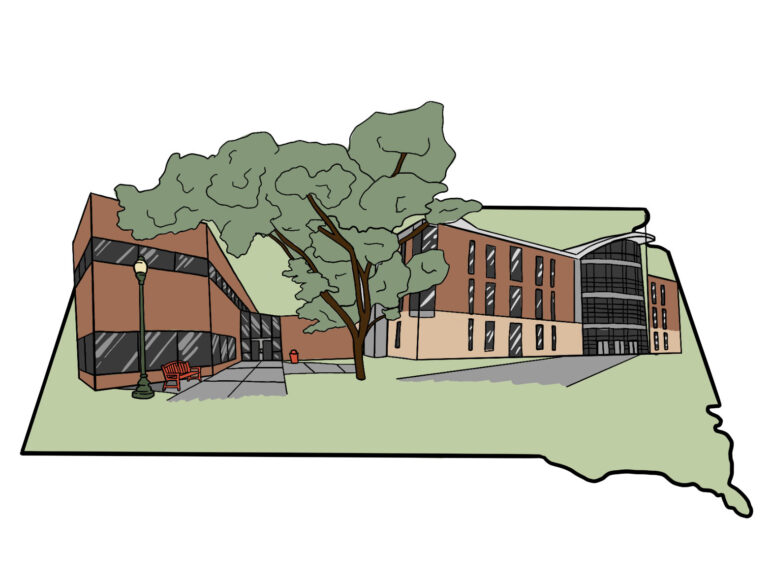 Campus
The University of South Dakota is the only university in the state that has a law school and a medical school. Leah Dusterhoft | The Volante.

USD is the only university in South Dakota that offers both a medical school and a law school, but for University President Sheila Gestring, that distinction only increases the school’s duties to South Dakota.

Gestring said the law and medical schools face a heightened level of obligation to help the state.

“(That is) a special responsibility, because we’re educating the future doctors and lawyers that are going to practice here in the state of South Dakota,” Gestring said.

Mary Nettleman, dean of USD’s Sanford School of Medicine, said 80% of the med school’s graduates plan to practice in South Dakota. One aspect of the medical school which has changed throughout Nettleman’s eight years here, she said, is the curriculum.

“The curriculum has been modernized,” Nettleman said in an email interview with The Volante. “There is a renewed emphasis on student wellness, a Certificate in Bioethics has been added, more experience with Native American culture has been added.”

The curriculum also features more experiences and fewer lectures in the first few years for students. USD’s medical school students have more clinical experience before graduation than most medical students, Nettleman said. Students also have proven to have high board scores and pass rates. She said the graduating class for this upcoming May earned 100% board pass rates on both required national boards.

“The most recent results show that our average board score was better than 75% of medical schools in the country,” Nettleman said.

One new project the school is starting to work on will emphasize the importance of kindness.

“We are fortunate to have students and faculty who are inherently kind,” Nettleman said. “What we are trying to do is to make kindness a visible part of our culture and curriculum.”

Neil Fulton, the Dean of USD’s Law School, said the school plays an important role in serious discussions about a variety of issues.

“When there are conversations about government, about justice in society, about who we are as a society, the law school really needs to be front and center in those conversations and I think our faculty, students and staff do that,” Fulton said.

Last year, 49 students graduated from the law school, and 203 students are enrolled this year.

One thing law students, as well as faculty and staff need, Fulton said, is to adapt to changes in the law. Property laws, which pertain to what people are allowed to own, have changed over time, Fulton said.

“In the course of (a property law) class, professors are going to talk about digital property and electronic issues in a way that they didn’t (30 years ago),” Fulton said. “So, even though the classes stay the same, the law continues to evolve to meet societal changes.”

Fulton said the school has expanded its connection with the East River Legal Services, so students can get volunteer opportunities to represent real clients. They’ve also added a practicum course with the Sioux Falls Public Defenders Office, which gets students in courtrooms.

“Our graduates are going to go out and be leaders in their communities and we’ve got graduates who are going out to almost every community in South Dakota and surrounding states in the region,” Fulton said.

Both the Law School and Medical School, Fulton said, play an important role not only to USD, but to the state of South Dakota.

“The Law School and the Med School and USD in general have a tremendous history of service to the state,” Fulton said. “That’s really important because a little bit about who were are defines a lot about who we’re going to be.”