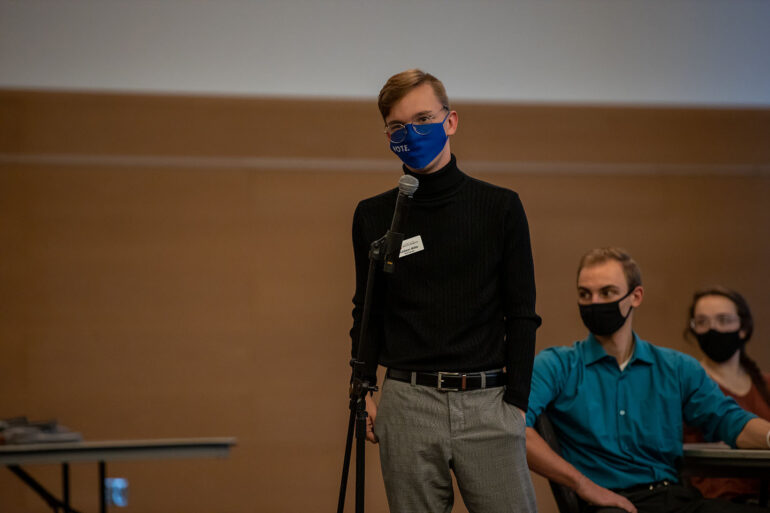 O’Kelley said starting next week, USD will begin testing for asymptomatic COVID-19 cases by selecting a sample of 100 on-campus students. While USD has recovered from an initial surge of cases, O’Kelley said locating asymptomatic cases is crucial to combatting the disease.

“So, while we know we have 20-25 cases active on campus now, we do not know how many are in the background, how many are invisibly sick,” O’Kelley said.

O’Kelley said nationally, it’s estimated that 40-45% of COVID-19 infections are asymptomatic, but that rate could be higher among USD students, who are younger and healthier than the national average.

Students selected for testing will receive an e-mail on Monday and be asked to report to Sanford Student Health to be tested.

SGA unanimously passed Senate Bill 60, which will implement election transparency. The bill requires the Election Steering Committee to release and archive full SGA election results, including number of ballots cast and percentages won by each candidate.

This means in the event that no candidate receives a majority of the vote, the votes of the candidate with the least ballots cast are sorted by second-place preference.

Miller demonstrated the process of ranked-choice voting using cardboard boxes, showing that in normal elections where a plurality winner is selected, more votes are cast against the winner than for them.

Miller has introduced three bills related to election reform this semester and said he wants SGA to act in this area with a preventative, not reactive attitude.

Miller is the director of Get Out the Yote on campus and said reforms like these haven’t happened earlier because the SGA election system as it has existed works in spite of there being room for improvement.