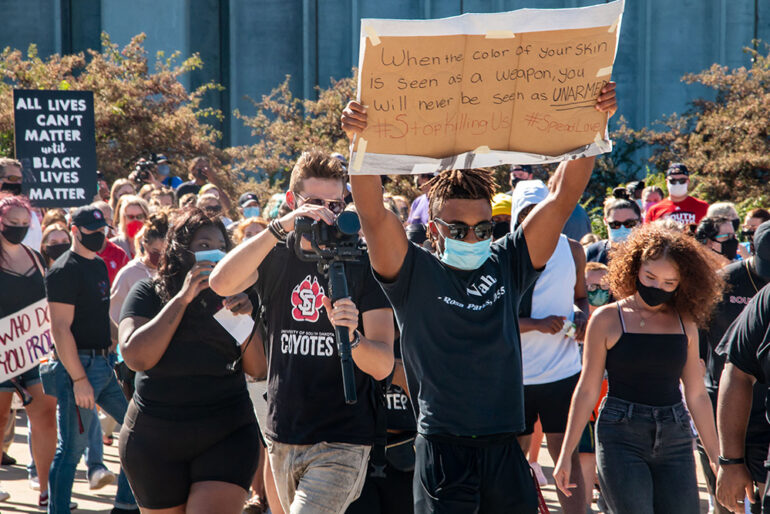 Campus
USD's Cultural Wellness Coalition (CWC) held a Black Lives Matter March in the beginning of September in response to the killing of George Floyd last May. File Photo | The Volante

Former Minneapolis Police Officer Derek Chauvin was convicted Tuesday of murder and manslaughter for kneeling on George Floyd’s neck for eight minutes until death. Floyd’s death last May set off a wave of protests for racial justice and police reform.

The jury found Chauvin guilty after 10 hours of deliberation over two days. Chauvin was found guilty of second-degree unintentional murder, third-degree murder and second-degree manslaughter. His sentence has not been set, but could be decades, according to the AP.

Police officers are rarely prosecuted for killing someone while on duty. According to the AP, since 2005, only 140 officers have been charged with murder or manslaughter, with only seven convictions.

Police-procedure experts and law enforcement officials, including members of the Minneapolis Police Department, testified for the prosecution that Chauvin used excessive force. Medical experts for the prosecution said Floyd died of asphyxia (lack of oxygen) due to the hold Chauvin placed him in.

The defense argued Chauvin followed his training and that Floyd’s death was the result of an underlying heart condition and drug use.

Under the law, police use of force is judged by whether their actions are “reasonable” under the circumstances.

Dakota Smith, co-founder of USD’s Cultural Wellness Coalition, said he believes the verdict represents justice, but that people should not be content.

“I can personally say I’m happy about it. It was something that was obviously long-awaited but is obviously a verdict that I would say represents justice and the kind of justice that I feel that we as a country aspire to stand for,” Smith said. “I would say there’s a long way to go.

Smith said the verdict is a representation of holding the justice system accountable, and that he feels relieved by the verdict.

“This is the first step of making greater change amongst our policing system throughout the country,” Smith said. “I know, just like in the past, that these kinds of decisions can go the way that doesn’t represent justice.”

The Cultural Wellness Coalition seeks to be a bridge to unify all cultures on USD’s campus, and Smith said that work involves being an agent of change in the community.

“It’s really as simple as that is just loving those around you,” Smith said. “There are still so many issues out there, that we need to continue the fight for justice.”