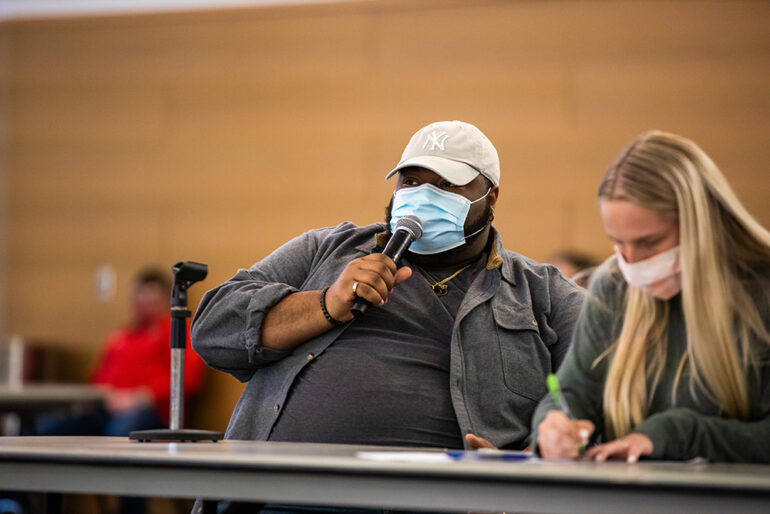 Campus
Marcus Destin, Co-President of the Cultural Wellness Coalition, spoke on behalf of Tiospaye at this week's SGA meeting. Peyton Beyers | The Volante

Tiospaye Student Council received a budget exemption for their annual Wacipi at this week’s SGA meeting.

The Tiospaye Student Council petitioned SGA to appeal the vote from last week to deny the budget exemption.

“In previous years, SGA has been generous in giving us this exemption,” Tiospaye President Julianna Benge said. “With the knowledge that we have gained in the past week and looking at budgets, we are requesting to exempt four thousand of our allocated funds given for fiscal year 21 through 22 to use for Wacipi payouts.”

Tylar Larsen, Tiospaye vice president, said USD felt like home to him, which was solidified after attending the 47th Wacipi.

“The Wacipi affirmed that I am home as a new student. I am more than welcome here, I am invited here,” Larsen said.

Wacipi payouts are awarded to dancers. Tiospaye will use $4,000 of their already allocated funds to pay for these rewards. The ability to use funds for this reason is what SGA voted on, exempting Tiospaye from specific rules in SGA fiscal guidelines.

“Tribes are not responsible to provide us money for Wacipi. As a USD event, the university has an obligation to the students and to the university to provide this funding. Institutional funding will cover 80% of our payouts,” Benge said. “The SGA exemption will cover the remaining amount of payouts which is $4,000. We are not asking for additional funding, rather, we are asking to utilize $4,000 of our allocated funds that we were given for fiscal year 21 through 22 to use for Wacipi payouts.”

Megan Red Shirt-Shaw is the director of Native Student Services and spoke at the SGA meeting on behalf of Tiospaye.

Red Shirt-Shaw asked the SGA senate to think about what kind of legacy they want to be a part of USD.

“This is very cultural and historical to be able to honor people for the things that they do well. There are people that train their entire lives to be a part of Wacipi. There are people that are very passionate about this; They make this their livelihood,” Red Shirt-Shaw said. “This is a tradition that has been here longer than many of us have been alive.”

There are more than 200 Native students attending USD.

“All around, I think there were quality questions from senators that were thought-provoking and helpful in the decision process of how to vote,” SGA Preseident Alexandra Feiner said. “Votes on exemptions are always tense and this year is nothing different, but I think that all senators were respectful in their decisions and emphasized that it had nothing to do with culture, but rather with what our fiscal guidelines allow. Ultimately, the senate holds the power to make this decision and I trust that they will do what’s best for the student body overall.”

“We should be looking for the best ways to promote student success, their talents, their heritage and their culture,” Linke said.

“We are all students here. We are all learning. There always needs to be room for that education piece,” Senator Gretchen Biersbach said. “This helps get indigenous students to USD and that’s extremely important. Let’s try to be allies.”

“I want to use my voice to say that I stand against these decisions that were made last week,” Co-President of the Cultural Wellness Association (CWC), Marcus Destin, said. “I represent the CWC. We are here to stand with Tiospaye.”

There were 17 yeas and 5 nays. Senators had differing views at the end.

“Following Marcus’s remarks I feel compelled to stick up for the senators in this room. I think that the assertion that there was any kind of ugly motive or any type of prejudice on behalf of anybody in this room is deplorable. Anybody who would predict those motives without speaking with them or asking us how that process was carried out should maybe do better next time,” Logan Johnson, the SGA Director of Finance, said. “It’s not my job to take either side – It’s the senators’ job to determine if it’s an exemption worthy of passing.”

Over 2,000 people annually attend the Wacipi, traveling from all over.