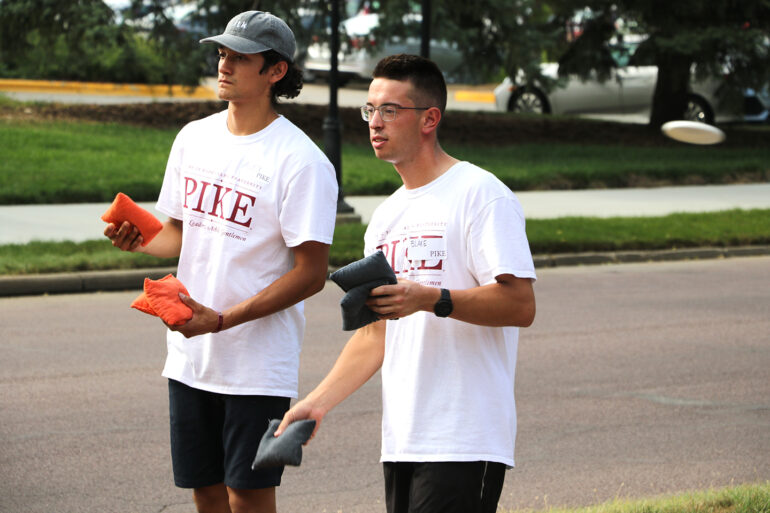 As USD students begin their first few weeks of classes, some among them have been busy getting involved in Greek Life.

For returning students, this means looking forward to social and service events that were previously cancelled due to COVID-19 restrictions. For new members, it’s a chance to see what Greek Life has to offer.

Kelsey Wathen, who recently got accepted into Kappa Alpha Theta, said she had always seen Greek life in movies and didn’t know anything about it. She wanted to know what the experience felt like, and decided she wanted to be in a sorority.

“For me, it was more of an exciting process. I didn’t know what to expect. None of my family has done Greek Life and I didn’t really know much about it, but I’ve only heard good things about it,” Wathen said. “it was just a great experience to meet a lot of girls and make new friends.”

New Pi Beta Phi member Olivia Morrow said she chose Greek Life to be involved in the community and because they have great philanthropic endeavors. She said the process was very overwhelming at first because she didn’t know what to expect and was really nervous.

“We went to the first house and it’s just like a bunch of girls just coming up to you and asking what your name is, so it was just overwhelming, then going into the other houses, it wasn’t that bad because you knew what to expect,” Morrow said. “It was very tiring. By the end of the night I was just so exhausted.”

Laura Anderton, director of sorority and fraternity life at USD, said fraternities and sororities are social organizations at their core, and that this year, students in Greek Life will be able to socialize more than they have in the past and recruit in less-restrictive ways.

“When we had to live through (the pandemic) where a lot of that social life was taken away, it made our organizations function so much differently than they usually do,” Anderton said. “I think everybody’s just really excited to get back to some sense of normalcy and some sense of being able to see their friends and… really live out that social experience.”

Ian Hansen, a member of Beta Theta Pi, said he is excited to welcome many new members to his fraternity.

“I’m excited to meet all the new guys and hopefully bring someone into our house and welcome them, as well as living up to the brotherhood and showing them a good time (and) helping them out throughout college,” Hansen said.

Anderton said that last semester, Greek Life was not able to raise as much money as it did historically, nor were sorority and fraternity members able to complete as many hours of community service as they used to.

Because of the lifting of mask mandates and capacity restrictions across the university, however, sororities and fraternities will be able to hold more fundraising and philanthropy events.

“They’re really excited to be able to get out and do some of those traditional things that they maybe had not been able to do because of size restrictions or interaction restrictions,” Anderton said.

Despite Greek Life’s current freedom to carry out operations as normal, Anderton said each chapter has put together COVID-19 contingency plans. These plans cover scenarios such as how houses will go about quarantining if their members get sick, or how chapters might restrict capacity at events.

For now, Anderton said, fraternities and sororities are getting the full Greek Life experience. Even if policies have to change in the wake of a COVID-19 resurgence, she said the institution has learned a lot since the beginning of the pandemic, and hopes to implement practices that allow students to continue to have the Greek experience in a safe way.