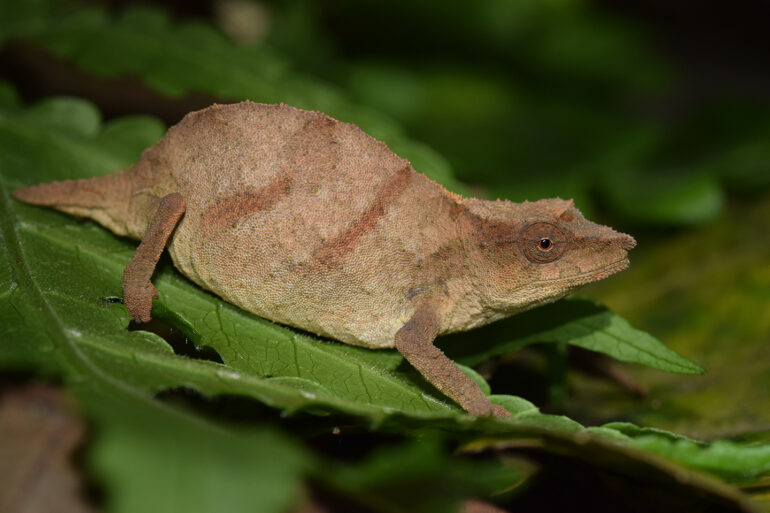 Campus
USD assistant professor Chris Anderson has been working on a study of the Chapman's pygmy chameleon. Submitted Photo | The Volante

Anderson took part in a team that did an assessment for the International Union for Conservation of Nature’s (IUCN) Red List of Threatened Species in 2014. This assessment placed the chameleon in the category of “critically endangered,” meaning it’s at high risk of extinction in the wild. Anderson said this determination was made based on the species not being seen in its native habitat in 15 years.

Anderson then helped to obtain funding to send a team to Malawi to assess whether the species was still present. He said funding was largely obtained through crowdfunding.

“We reached out to the general public and particularly the community of individuals who are interested in chameleons as a hobbyist because they’re kept oftentimes as pets,” Anderson said.

The most expensive piece of the research project would have been flying Anderson to Malawi. Since the rest of the research team was based in South Africa, in order to ensure the project went forward, Anderson remained in the United States and contributed to data analysis and the formulation of the results of the study.

The study found that the chameleons were still present in the environment, but at a greatly reduced rate. The native habitat had been reduced by about 80% or more since 1980 based on satellite imagery and aerial photographs taken from the time. Anderson said that only about 45 hectares, or 0.17 square miles remain.

A further problem is that the habitat has been fragmented so that remaining chameleons are unable to travel from one fragment to another. However, Anderson said part of the species had relocated to a second site about 15 years ago.

“The species at the translocation site is still surviving and appears to be flourishing,” Anderson said. “Hopefully this translocation site could serve as a bit of a safety net in the event that the habitat in the native range is not able to be conserved.”

The species’ habitat is currently being cleared for subsistence agriculture, which causes further problems with soil erosion. Anderson said in order for the species to survive, the remaining habitat needs to be conserved. In order for this to happen, Anderson said, a large non-governmental organization would need to become involved and work with the government of Malawi to safeguard the habitat. Anderson said it’s critical for the local population to be involved in any conservation efforts.

“Without having the local population on board, any mitigation is probably going to be short-lived,” Anderson said.

In the short-term, this work will involve outreach efforts to local communities as well as building capacity in the local community to monitor the environment and safeguard it.

Anderson said chameleons are a species group prone to extinction. While about 15% of lizard and snake species worldwide are threatened with extinction, for chameleons that number rises to more than one-third.

“We hear a lot about biodiversity loss, just generally things about amphibian declines and so forth,” Anderson said. “These animals are quite sensitive to a lot of the pressures that are ultimately causing some of the broader trends we’re seeing in biodiversity declines.”