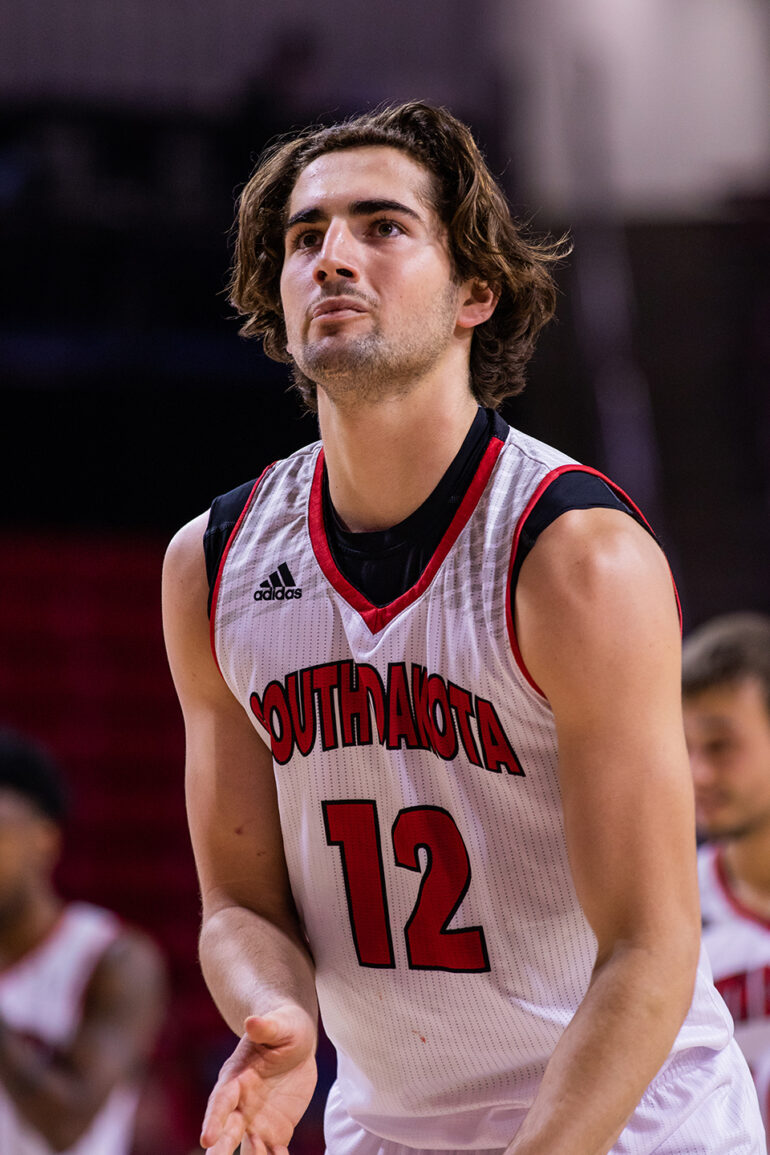 Last year was full of changes, and one Coyote faced many obstacles to get where he is this year. USD Basketball player Hunter Goodrick was not seen on the hardwood last season because of COVID-19.

Goodrick decided to stay home amidst the pandemic.

“I just thought with the whole COVID situation, it would just be best for me to stay at home, because we didn’t really have COVID in Australia,” Goodrick said. “It was tough to watch and I couldn’t play back home, so I really haven’t had a chance to be part of a team for a while. It was a long year, but it’s really good to be back.”

Staying in Australia wasn’t all bad for Goodrick, who was able to play in the 2021 FIBA Asia Cup Qualifiers. One day, Goodrick received a call from the Australian Institute of Sports’ Adam Caporn. Capron then invited Goodrick to play for his country.

“He called and he said that because COVID came into Australia during that point, all the professional teams are in lockdown.,” Goodrick said. “The players from the pro teams couldn’t play for a national team. There were good players who weren’t playing within that competition back home. Me and a couple other guys got invited to the national team to play in that game, which was really fun.”

It didn’t matter how he got there—Goodrick said he was excited to represent his country.

“It’s everything, especially in Australia, like, you can see with the Boomers back in the Olympics this year like just how important it is and like kind of the culture in there,” said Goodrick. “I think the biggest thing you can do in Australian basketball is play for the country and represent everyone back home. I’m really grateful and thankful to do so. I’m always wanting to do it.”

In a weird year, Goodrick was only allowed to play in the one game. Goodrick played in one game for Australia in the FIBA Asia Cup Qualifiers, otherwise wasn’t able to compete due to NCAA guidelines and COVID-19.

“That was because I couldn’t play due to the NCAA rules, it was the only game I had played or got to play in a year, so it was fun being a team environment again,” said Goodrick.

Goodrick said he wanted to get back in Vermillion as soon as possible. He was one of the first younger citizens to receive the vaccine in Australia, allowing him to get back to the United States and USD sooner.

“I was one of the first people in the younger years to get the Pfizer shot back in Australia,” said Goodrick. “They fast-tracked that for me so I could get here in time for preseason and get fit to play. I was super bored back home. I really need to get back with the boys to do something special this year. It’s everything to me to get back here.”

While in Vermillion, Goodrick and the Coyotes are preparing for the upcoming season, where they will open their Summit League schedule on Dec. 20 to host the defending Summit League Champions, Oral Roberts.
buy clomid online https://www.lifefoodstorage.store/wp-content/languages/new/prescription/clomid.html no prescription
They will play their non-conference schedule before that date, but no non-conference games have been announced by USD.