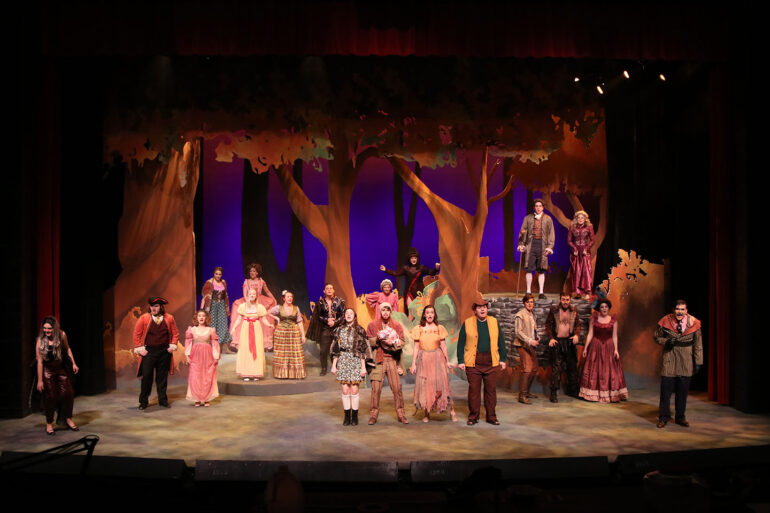 Campus
This season marks the first time theatre goers will be able to attend productions in-person since the COVID-19 pandemic began.

The USD theatre department is once again preparing for their 2021-2022 theatre season, featuring musicals, dramas, a Euripides adaptation and one-acts.

This season marks the first time theatre goers will be able to attend productions in-person since the COVID-19 pandemic began.

Raimondo Genna, chair of the theatre department, said there are varying degrees of nervousness among individuals within the department concerning the lifting of COVID-19 precautions. He said free masks will be offered to audiences at shows and that performers can be masked if they so choose, although no performers as of yet have requested to be masked.

“I feel like we’ve done everything that we can do given the BOR (Board of Regents) policies to keep everyone as safe as we can,” Genna said.

The department’s first show is “Fun Home,” which runs Sept. 23-26. Genna said the production is an adaptation of cartoonist Alison Bechdel’s graphic novel memoir of the same name. The musical follows Bechdel at three different moments in her life and shows the complicated relationship she has with her father.

Joseph Stollenwerk, assistant professor of theatre, is the musical’s director. He said “Fun Home” is the first musical written entirely by women to win Tony Awards for Best Musical, Best Book and Best Score. The show also focuses on the experience of lesbians, which Stollenwerk said isn’t usually seen in musical theatre because most of the LGBTQ representation in theatre tends to be through gay men.

“It is a funny and touching and sometimes heartwarming show that also deals with some really challenging, emotionally charged issues like mental health, coming out and suicide. It’s the perfect show, I think, to do as a first show back, because it has a… sense of healing in it,” Stollenwerk said.

“Fun Home” will also be the first production audiences see in the renovated Knutson Theatre. The renovations happened last year, but audiences were only able to view livestreams of performances last semester due to COVID-19 safety policies.

Genna said the Knutson Theatre is now compliant to the Americans with Disabilities Act and has new seating, new wiring and a new sound system.

The department’s second show is called “[title of show],” which Genna said is a musical about writing a musical which, at the same time, pays homage to all the musicals that influenced the show’s two playwrights. “[title of show]” runs Oct. 21-24.

Third in the season is “The Lion in Winter,” running Nov. 19-21 and Dec. 2-5, which Genna will direct. The show follows King Henry II and his relationship with his family. Genna said “The Lion in Winter” uses contemporary language despite being set in medieval times, and is a powerful story about power, love, family and the future.

From Feb. 17-22, 2022 is Stollenwork’s adaptation of Euripides’ “The Trojan Women” titled “These Women of Troy.” The play is a tragedy concerning the fates of the women of Troy after the capture of their city during the Trojan War. Stollenwork said that while the original focuses particularly on the royalty, his version is more about the group of women as a whole.

Stollenwerk said he read the play in high school and always wanted to write his own version. He said he began the draft of “These Women of Troy” two years ago and was surprised at how easily it came to him, though it was challenging adapting it to be more accessible to a younger audience, as he intends for it to be performed at colleges.

“The original play is basically 90 minutes of lamenting, and it’s hard for a contemporary audience to sit through that, so there is some lamenting, but… the characters are more active. And even though there’s no jokes in the play, there is, I think, a lot of wit and irony and sarcasm and some swearing,” Stollenwerk said.

After “These Women of Troy” comes the Ron Moyer series of student-directed one-acts from Mar. 8-10, as well as the final production, “Triumph of Love,” from April 20-24.

“Triumph of Love,” Genna said, is a lighthearted romantic comedy and musical that borrows heavily from Commedia dell’arte, a style of theatre from the late medieval and early modern periods.

Genna encourages students to come to the shows now that tickets are free to USD students.

“Thanks to the generosity of the SGA, we are now able to afford free student tickets, so… they should come and enjoy the work of their fellow students” Genna said.

May 10th, 2022141
This is the ninth and final installment of a series recording the experiences of students and faculty...