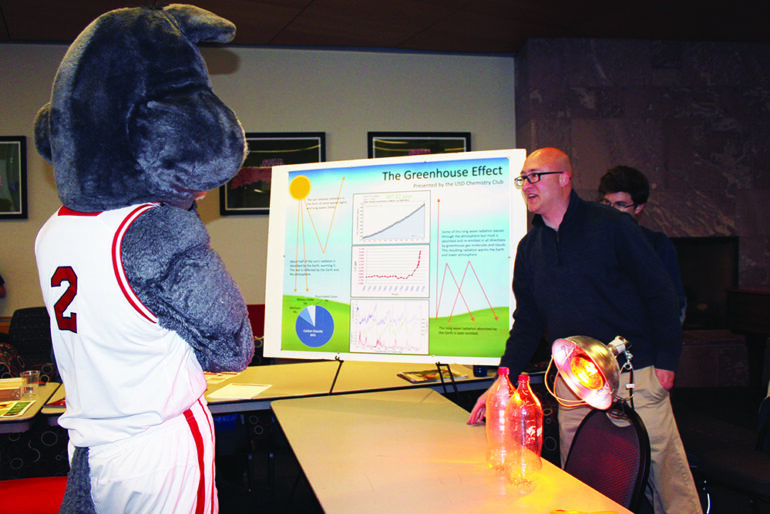 According to the National Oceanic and Atmospheric Administration, September was the third warmest September on record for North America. The climate of South Dakota is changing and will continue to change in the coming years. The Earth is beginning to see the effects of pumping fossil fuels into the air, and with that, the entire world’s climate will change as well.

Meghann Jarchow is the USD sustainability department chair and an associate professor for sustainability and the environment. Jarchow said winters and summer nights will continue to get warmer, the growing season will be longer and extreme weather events will occur more frequently, including droughts, floods and storms.

“Climate change is happening, and we’re seeing it. In terms of having a longer growing season, that’s upon us now, and that will just continue. Let’s say over the next decade, we’ll probably on average, with climate change, be more likely to have more of these extreme weather events,” Jarchow said.

In 2019, South Dakota experienced flooding that affected the crop output of the state. Jarchow said spring flooding will be much more common.

“In 2019, South Dakota led the United States for the number of acres of cropland not planted because we had a flood. Growing crops that require a pretty narrow window in the spring… is going to become more problematic with climate change, and we’ll probably have more years where we have crop failure,” Jarchow said. “We just have to start acknowledging what’s happened and acknowledge what’s likely to happen in the future and then think about how does that change what we need to do.”

The way climate change is affecting the seasons isn’t consistent, Jarchow said. The impacts of the changing climate are different from spring to summer and autumn to winter.

“I think that the complexity of climate change can be confusing to folks. Overall, it’s warming. More of the warming is happening in our winters (than) in the summers. It ends up getting complex in that how climate change affects the seasons is not consistent,” Jarchow said.

Mark Sweeney, USD professor of sustainability and the environment, said the impact of climate change in South Dakota has been extreme.

“In 2019, we had the wettest year on record, and in 2021, we have been in drought. These drastic changes are expected in a changing climate, as our atmosphere becomes more volatile as it warms,” Sweeney said. “Warmer air temperatures means the atmosphere can hold more moisture, which translates to wet summers and even snowy winters. But the opposite can also happen with regards to increasing occurrence of drought. In addition, South Dakota has seen an increase in its growing season due to warmer overall temperatures.”

Along with changes in the temperature of the air, changes in soil moisture will impact agriculture in South Dakota, which is a direct result of the changing climate, Sweeney said.

“Agriculture is being affected by the availability of soil moisture. Too much results in flooding and loss of crops. 2019 was a good example of that. Too little means drought and a loss of crops,” Sweeney said.

Jarchow said being more diligent about what is being planted and when planting begins will be vital to adapting to the changing growing season.

At this point, Jarchow said, neither South Dakota nor USD has public contingency plans to cope with the changing climate.

“I don’t know that we’re in a great place in terms of having plans written out for how we’re going to deal with climate change,” Jarchow said.

Sweeney said USD works to educate students on the environment, sustainability and the changing climate.

“We are trying to educate students on climate change and its effects not only on the environment, but the human condition. While I teach a semester course in global climate change, I know that other professors incorporate the effects of climate change on ecosystems, culture and the economy,” Sweeney said. “Our department and the university embraces sustainability, not only in recycling, but also in making decisions that have less of a climate and environmental impact.”

The U.S. should be a leading nation toward sustainability, Jarchow said. She said recognizing the role the country, states and cities play in contributing to the changing climate is going to be important as time goes on.

“I’m hopeful.. And I am hopeful at the national level we see leadership in the United States that is explicitly recognizing climate change, and making us take action to mitigate and adapt to it so we try to change our behaviors in ways that would reduce the impact of climate change,” Jarchow said.