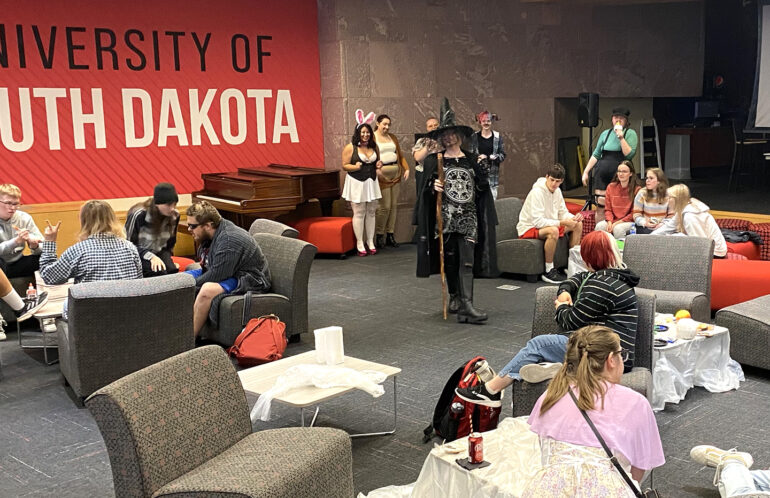 Diversity
The Fashion Show allowed each contestant to show off their costume on the runway while posing a few times along the way. Calli Connors | The Volante

Spectrum hosted a Great Pumpkin Gala Fashion Show in the Muenster University Center (MUC) pit Oct. 15. Spectrum is a gender and sexuality alliance club on campus at the USD.

The fashion show contestants included a witch, Lin Manuel Miranda, a hippie, a bunny, a bull and a conservative mother and her gay son.

Spectrum’s president, Isabel Young, was the host and commentator for the night.

“When it comes to Halloween, I feel like that has always been an open space for LGBTQ+ people to feel like they can exist,” Young said.

“The purpose of tonight is to allow the LGBTQ+ community a space to feel comfortable in our presentation,” Young said.

Each contestant was given a chance to show off their costume by walking up and down the runway and posing a few times along the way.

“Everyone who dressed up and wants to will be walking down the runway. Everyone will see them walk up and down. They’ll strut and pose—it’s going to be a lot of fun,” Young said.

Young mentioned that the fashion show was also a look back at Ball culture. This was when LGBTQ+ Black individuals and Latinos had underground drag shows where they were free to walk and compete for trophies.

Trophies were given out to the top three contestants. The bunny came in third place, Lin Manuel Miranda came in second place and the winners were the gay son and his conservative mother.

Spectrum has more planned for the rest of the year, including a Drag Show Oct. 24.