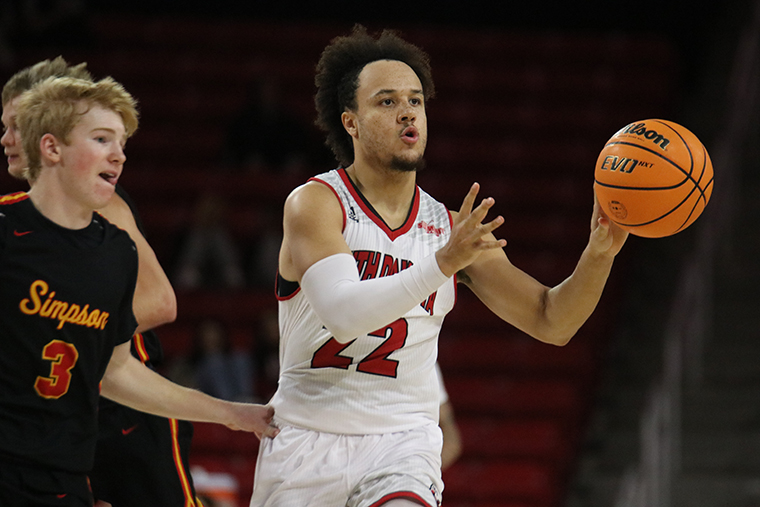 The USD men’s basketball team kicked off their 2021 season Thursday night with an exhibition game against Simpson College Storm.

The Simpson College Storm are a Division III school. Last season, they went 3-7 overall along with 3-4 in the American Rivers Conference. As for the Coyotes, they were 14-11 overall and went 11-4 in the Summit League, making them second place overall. The Coyotes lost in the Summit League Quarterfinals to North Dakota State.

The Coyotes defeated the Storm 98-47. Every member of the Coyote squad scored a point in the game.

The Coyotes’ starting lineup looked a little different compared to last season’s roster, losing their two leading scorers in Stanley Umude, who transferred to Arkansas, and AJ Plitzuweit, who is out for the season with an injury. Junior Kruz Perrott-Hunt and senior Mason Archambault played in the back court. The front court consisted of senior Xavier Fuller, junior Tasos Kamateros and redshirt sophomore Hunter Goodrick.

The Coyotes were led by junior guard Kanon Koster. Koster led the team in both scoring and rebounding, with 17 points and 12 rebounds. He also shot 8-9 from the field along with hitting his only three-point attempt in the game.

Other notable scores were Kamateros, who had 12, and Perrott-Hunt, who also had 12. Archambault and Goodrick put their names in the double-digit category, scoring 11 points each in the game.

All of the newcomers to the team played for the Coyotes in the game. The first of the players was junior transfer guard from Laramie County Community College Erik Oliver, who had 8 points and three steals (tied for the team’s most).

The other three that played were all true freshman. The first was Keaton Kutcher, whose first shot as a Coyote was a made three. Second was Ty Walker, whose first score was late second half. The third player was Graham Cassoutt, who scored his first points in the paint.

The Storm had one player break the double-digit point mark: Andrew Curran, who had 13 points in the game. Their other top scorer was Deontei Johnson, who had nine points.

For the Simpson College Storm, their first official game will be played against Fontbonne in St. Louis, Mo. for the A-R-C/SLIAC classic.

As for the Coyotes, their next game is Thursday, where they will head to the Sioux Falls Pentagon to play Air Force on Veterans Day. This game will not be an exhibition game, however, as it will be the Coyotes’ first official game of their 2021-22 season and kick off their non-conference schedule.