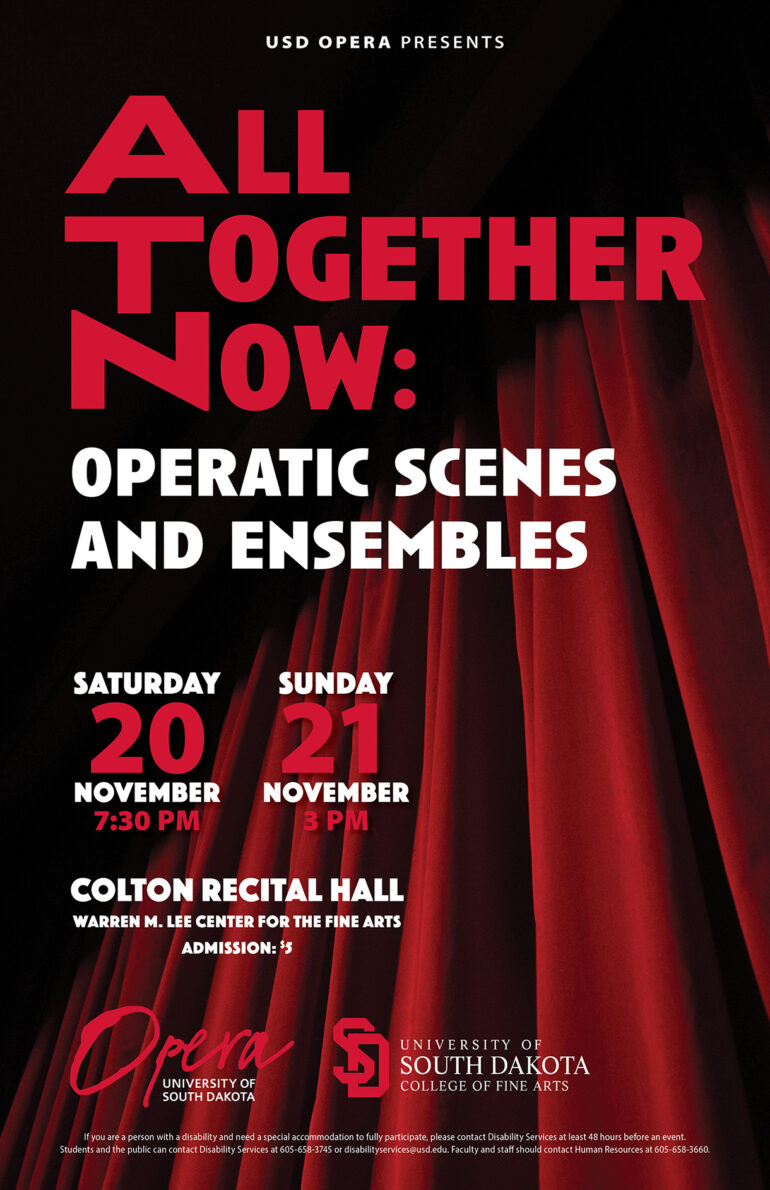 Events
USD opera will be performing in eight different scenes where they must act, interact with other students and move around the stage. Submitted Photo | The Volante

USD Opera will be hosting its first event of the year, “All Together Now: Operatic Scenes and Ensembles” Nov. 20 and 21.

The program features eight scenes from operas and operettas with music by composers such as Mozart, Rossini, Bizet and Stephen Sondheim.

Assistant Professor of music JuanCarlos Mendoza is directing the event. Mendoza said this is his first semester on campus, and that he’s using the event as an opportunity to get to know the students and how they perform.

Unlike band and choir pieces, where musicians perform isolated musical numbers, members of USD opera will be performing in scenes where they must act, interact with other students and move around the stage.

Freshman music education major Maleah Wright is performing in two scenes, one from “The Gondoliers” and one from “A Little Night Music.” Wright said that this style of performance allows students a freedom that traditional choir sometimes doesn’t provide.

“With a choir piece, there might not be a clear story behind it. You might just be singing some text. Now, does that mean that there’s not music to be made? Not true. You can always get music out of text. But with opera, you have a background, you have a character that you’re coming from,” Wright said. “Every person is going to interpret that character differently… so that’s been fun to mess around with and play.”

Opera is also different from a medium like musical theatre, senior vocal performance major Adam Lange said, because opera does not rely on electronic assistance for amplification.

“There’s different overtone series that carry the voice with opera singing, and that’s where you get that big sound that shakes people,” Lange said. “It’s really an experience for someone who’s never been to an opera before.”

“I find it personally really awesome, just because I can interact with people who have more experience than me, and I can try to grab some information from them to… grow my own expertise,” Privett said. “Even some of my freshmen friends who have come in, they’re talented—very talented—but it’s also really fun to share in those learning moments with them.”

Mendoza said that almost every singer is in multiple scenes so they have the chance to perform fully fleshed-out characters. He said he wanted to make sure that no one ever felt like they were a background actor, which can happen sometimes with first-year college students.

“So I kind of had those goals in mind: one, to make sure everyone vocally was showcased, (and) two: that they all felt like they can play different characters and experience contrasting characters, so being able to play a princess in one scene, and then in another scene play a smuggler tarot cards, and learning how to make those adjustments in one evening,” Mendoza said.

Graduate student Kevin Phillips said transitioning between these scenes can be challenging if students have one performance right after another. He said it takes a lot of practice to change costumes, get into character, stay in character and make that character feel real.

“(It) can be really hard to do when you just came from a completely different character, but the more you practice it, the more genuine it feels, and the easier you’re able to make some of those planned, choreographed things look and feel… spontaneous and in the moment,” Phillips said.

Mendoza said the event is different from a traditional long opera because the time commitment is shorter. Phillips said this format makes opera more accessible to people because it gives them a little taste of many different kinds of opera.

“Coming to an event like this… can show someone ‘Oh, I actually enjoyed that scene, so maybe I would enjoy watching a longer version of an opera built like that,’” Phillips said. “You might not enjoy everything, but I guarantee you’ll find something you like to listen to if you go and that can just help you build on maybe going to your next performance.”