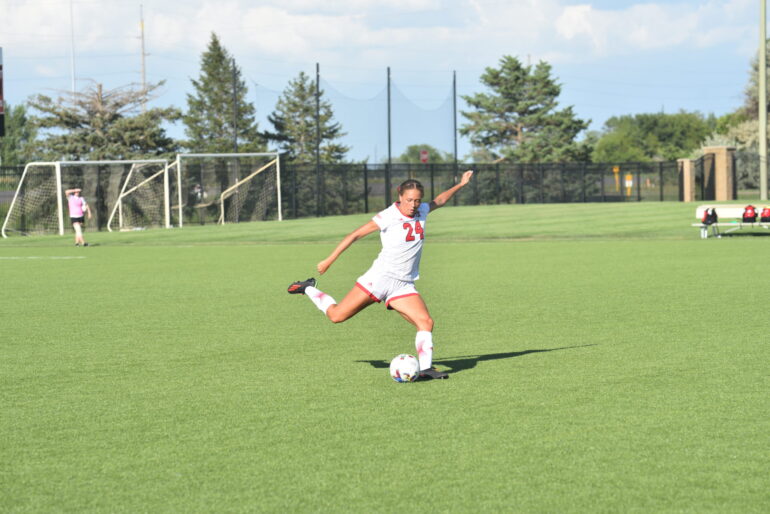 Maliah Atkins, a junior defender for South Dakota’s women’s soccer team, was called up to play for the Jamaican National Soccer team. She got the call in the middle of August, and she left to go play with the team on Aug. 29.

She said she is very excited whenever she gets the chance to play soccer with the national team because it helps her to improve her skills and grow as a player, but she also believes it is slightly terrifying.

“Every time I get called up, I am very nervous because there are huge expectations, and I just want to complete those expectations,” Atkins said.

This isn’t the first time she has been asked to join the national team, she has previously played as part of the U-20 team. This is her first time competing with the senior national team.

“I got the call for the first time to go play with the U-20 team, and that was a lot of fun,” Atkins said.  “I got to meet so many new people and get many new experiences, and it got me ready to play with the national team.”

Atkins said when she went to play with the national team she didn’t get much playing time but regardless it was an enjoyable experience.

“When I was with the team, we only had two friendlies, so they didn’t count towards anything,” Atkins said. “I didn’t get to play in the first one, but I got to play in the second one, and it was a lot of fun.”

While Atkins has put a lot of time and effort into the sport she loves, she said it’s those who support her who have helped her get to opportunities such as this.

“I have a great support system from the staff at the school to the national coach. I can go to anyone and get advice to be able to better myself for the future,” Atkins said.

Atkins appreciates the recognition and hopes she continues to get it. She said this kind of acknowledgment is what drives her to keep performing at the highest level.

“Being called up is the right people showing that they can see my skills and appreciate my game,” Atkins said. “I love the fact that they see that in me, and it helps me to continue to push my game to be better and grow as a player.”

Atkins hopes to finish her career as a Coyote playing to the best of her ability and then continue to play professionally.

“My goal and plan for a long time now has been to play soccer professionally and with the national team so I continue to play and get better,” Atkins said.