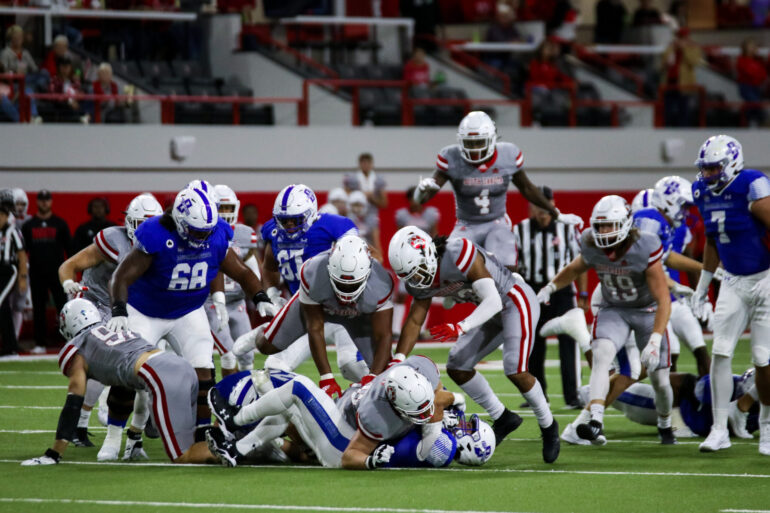 The South Dakota Coyotes head back home after back-to-back away games where they’ll face Southern Illinois in the 105th Dakota Days football game.

Last year’s playoff rematch takes center stage at this year’s D-Days. The Salukis defeated the Coyotes in the first round of the FCS playoffs last November, 22-10, inside the DakotaDome.

In that game, both teams were ranked inside the top 25. SIU led by 13 points at half and stayed out in front advancing to the second round of the playoffs.

Southern Illinois leads the all-time series between these two teams (4-3) winning the last two meetings, both inside the DakotaDome.

Southern Illinois enters the game with a 5-2 record and currently ranked No. 14 in the media poll and No. 17 in the coach’s poll. The Salukis head into the D-Days game with a five-game win streak after dropping their first two contests.

SIU kicked off their win streak against the Big-10’s Northwestern Wildcats 31-24 to end their non-conference schedule in September. Southern Illinois is undefeated in conference play (4-0) with wins against North Dakota (34-17), Illinois State (19-14), Missouri State (38-21) and Western Illinois (30-7).

The Salukis look to win back-to-back homecoming games, as they won last week at their own homecoming game against the Leathernecks. Junior running back Javon Williams Jr. passed for 36 yards, rushed for 49 yards, had four rushing touchdowns, compiled three catches for 23 yards, and returned a kick for 26 yards in the win.

South Dakota walks into D-Days week with a 1-5 record and is not receiving any votes. The Coyotes’ only win this year was their home opener against Cal Poly (38-21). USD is currently on a three-game losing streak after falling to North Dakota State (17-34), South Dakota State (3-28) and Illinois State (10-12).

The Coyotes look to break their losing streak against Southern Illinois after losing to the Illinois State Redbirds last weekend. The Coyotes rushed for 132 yards in the loss with redshirt freshman running back Shomari Lawrence leading the way with 75 rushing yards and a touchdown. Redshirt freshman Javion Phelps had a career high four catches in the game for 89 yards.

The Salukis’ offense is ranked fourth in the Missouri Valley Football Conference (MVFC), averaging 382.4 yards per game, with 250.6 of those being passing yards. SIU has averaged 30.3 points per game which puts them second in the MVFC.

The offense is led by junior quarterback Nic Baker who has completed 70 percent of his passes for 1584 yards, 11 touchdowns and two interceptions.

Baker was also named the MVFC Offensive Player of the Week for his performance against Western Illinois where he completed 25 of his 28 passes (89.3 percent) for 227 yards. This percentage was a Southern Illinois school record and just 7.1 percent off the FCS record.

Junior running back Ro Elliot leads the Salukis in rushing attack as he’s ran for 347 yards and three touchdowns this season.

Sophomore quarterback Carson Camp is the second most sacked quarterback in the conference being dropped to the turf 23 times. Camp has passed for 894 yards and four touchdowns while throwing five interceptions in the opening six games.

The Coyotes’ rushing attack is sixth in the MVFC with 132.7 yards per game. Led by the duo of sophomore running back Travis Theis and Lawrence as the two have combined for 749 rushing yards and four touchdowns.

Southern Illinois’ defense has allowed 25.9 points and 339.4 yards per game, which both rank in the top half of the conference. The Salukis’ rushing defense is the second best in the MVFC allowing only 80.7 yards on the ground per game.

Junior cornerback PJ Jules leads the team with 37 tackles. SIU leads the conference with 26 sacks as sophomore defensive end Richie Hagarty has a team best 5.5 sacks and 6.5 tackles for a loss, and a forced fumble. The Salukis have five interceptions on the year with sophomore linebacker Branson Combs leading the way with two picks.

South Dakota’s defense allows 25.5 points (fourth in the MVFC) and 399.5 yards per game (sixth in the MVFC). USD’s passing defense is fourth best in the MVFC allowing 191.2 yards through the air per game. South Dakota has forced four interceptions this season.

Sophomore defensive back Myles Harden is tied for having the most interceptions in the conference this season with three picks and he has forced the most fumbles with four. Junior linebacker Stephen Hillis has a team best 59 tackles, 6.5 tackles for a loss and three sacks. Hillis also leads the MVFC in total tackles this season.

Hillis was named the MVFC Defensive Player of the Week for his performance against Illinois State. He had nine tackles, two sacks, a forced fumble and broke up a pass.

The Coyotes will be at home in the DakotaDome on Saturday, they look to keep their five game winning streak alive on D-Days.