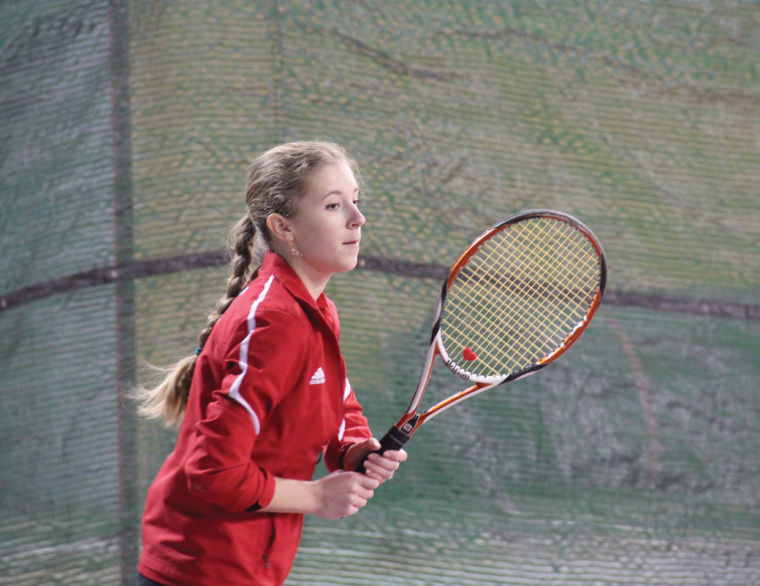 After going 4-3 as a team (6-7 overall) during spring break, the women’s tennis team is preparing to head to Wisconsin this weekend.

The team spent a week in Florida, playing against seven teams from around the country. The women lost to Florida Atlantic 6-1 March 9, and to Evansville 4-3 March 10, before beating Siena College 5-2 March 11 and Southern Indiana 9-0 March 13. The Coyotes lost to Bethune-Cookman 5-2 March 13 and wrapped up the week by beating Upper Iowa 7-0 March 14 and Florida A&M 4-3 March 15.

First-year Yuliya Sidenko earned the Summit League’s Women’s Tennis Athlete of the Week honors for going 7-0 in singles and 3-0 in doubles play in Florida.

“I just played my game and tried to play better each match,” Sidenko said. “I’m really happy with my play right now, and these were some of my first matches with my team, so I thought I did a good job.”

Sidenko said that, since this was her first time experiencing the spring break week of tennis, it was a good learning experience for her.

“It was really interesting for me,” she said. “We did really well as a team, and we played a lot of tough teams.”

Head coach Malcolm Gilreath said the play was competitive, but his team continued to get better all week.

“My main goal with this week was to get them ready for conference play,” Gilreath said.

In addition to Sidenko going undefeated for the week, Gilreath said the other highlights came from the team’s match against Florida A&M, when the team was down 1-3 and came from behind to win 4-3.

“It was a dramatic win,” Gilreath said. “(Junior Rymma Maslova) won our last match of the day from behind to give us the win.”

First-year Dragana Brankovic said she was happy with the team’s play during the week.

“There were a lot of close matches, but everybody played really well and we got some good wins,” she said.

As for her own game, Brankovic went 5-2 in singles play.

“I felt pretty confident with my game, and I made some good results,” she said.

Now, the team is looking ahead to a weekend of play in Wisconsin. They’ll take on Wisconsin-Green Bay March 28, Wisconsin-Stevens Point March 29 and Wisconsin-Milwaukee March 30.

“They’re going to be good matches,” Sidenko said. “If we keep doing what we’ve been doing, we can win.”

Brankovic said the team will work on its rhythm and tactical skills to prepare for the three Wisconsin teams.

“We want to make sure we know how to beat them,” she said.