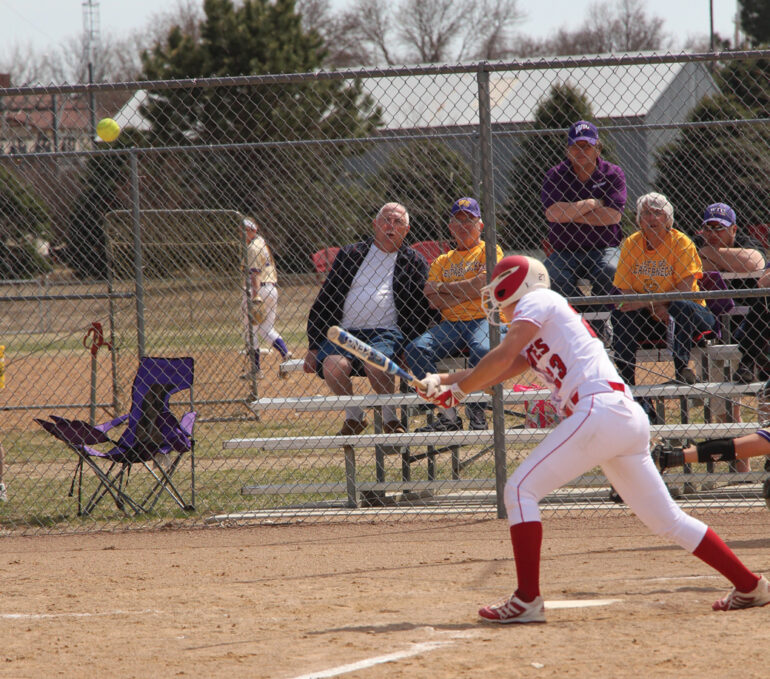 For the first time this season the University of South Dakota Coyotes softball team went three games in a row without giving up an earned run.

The Coyotes hosted Western Illinois for a double header April 11 and a single game April 12.

“Western Illinois has been a top five batting team in the nation, so for our pitchers to not give up an earned run is awesome,” head coach Amy Klyse said.

In the first game of the series, junior Matley Jones hit a homerun in the fifth inning to put the Coyotes on the board. The Coyotes were down 2-1 in the bottom of the seventh inning.

With two outs, junior Allie Daly was up to bat and hit a game-winning walk off to bring in senior Lindsey Boyd and junior Katie Dinning. Daly was 3-3 in the game with a double, two singles and a walk. The Coyotes won the first game 3-2.

“It was pretty exciting — just being able to step up in a pressure situation — and coming through with the win is the biggest part,” Daly said.

In the second game the Coyotes never trailed. Daly and Jones added homeruns in the first and sixth innings, respectively. Sophomore Madison Frain led the Coyotes on the mound as she gave up no earned runs and had a strikeout against the Leathernecks.

The Coyotes faced the Leathernecks once more April 12, where they won 2-0, sweeping the Mastadons three games to none.

Jones led the Coyotes again Saturday as she finished the game with a run and a hit. Senior Christine Broders also had two hits and an RBI for the Coyotes.

Boyd said she was impressed with the team’s efforts this weekend.

“It went great. (Daly) and (Jones) came up clutch for us and we had productivity throughout our line up,” Boyd said.

“They have a great pitcher who handled us well last year,” she said. “They’re sitting well in the conference right now and competing well against everyone. Just like always, we will have to bring our ‘A’ game and expect that there will be a lot of work for our defense.”