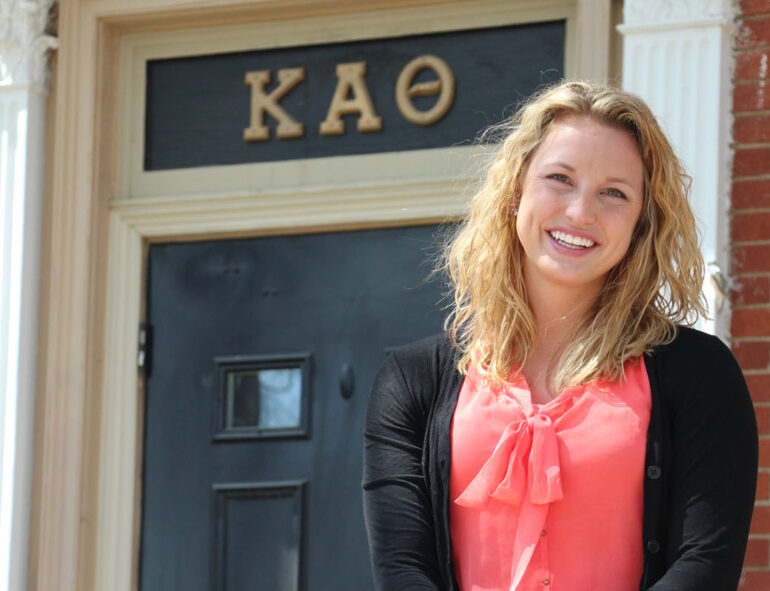 Anna Hyronimus, a senior member of the Kappa Alpha Theta sorority, will lobby in Washington, D.C. April 30 for the Collegiate Housing and Infrastructure Act (CHIA), which would reduce the costs for students living in Greek houses across the country, including those at the University of South Dakota.

The act encourages charitable donations and improved costs of living for not-for-profit student housing entities such as Greek fraternity and sorority houses, and will be presented to Congress this session.

Support for CHIA would allow donations made to not-for-profit university organizations to be tax-exempt if the money donated improves the safety and infrastructure of the houses.

CHIA would present an opportunity for more donations to improve houses and living costs. Donations would be made toward additions such as safety features and basic utilities.

Tau Kappa Epsilon fraternity installed a new fire sprinkler system that runs throughout the house two years ago — a charitable donation to TKE for the system would be encouraged and tax-exempt through CHIA.

Lucas Peterson, sophomore and vice-president of TKE, said the fraternity is always looking at inspection of house and grounds to make an easier living experience for the entire house.

“Every year we have the fire inspector come in and tell us if there’s something we need fixed,” Peterson said. “The sprinkler system was huge and helped us get up to code. We try to keep costs low in general with rent and utilities.”

Peterson said the official costs of living in TKE go through an alumni board. The alumni board control is common for all Greek houses, Hyronimus said.

“There are usually facility corporation boards that dictate where money will be spent on,” Hyronimus said. “The funds they receive are usually given by generous alumni, not charitable organizations.”

Hyronimus said creating a more open lane for donors is the ultimate goal of CHIA. She will present statistics in favor of off-campus Greek housing, USD student government resolution in favor of CHIA and photos of infrastructure needs to South Dakota’s three representatives in Congress.

Student Government Association senator Rachelle Norberg said the act would certainly help the Greek system first, but there is potential for CHIA expanding its impact to other groups.

Norberg said she is under the impression it could have nationwide and campus-wide impact as well.

“It would mainly affect the Greek community on campus, but it has the potential to affect other organizations if they were to purchase property and establish the same type of living system as the Greek system,” she said.

SGA approved a resolution April 15 in support of CHIA and Hyronimus’ lobbying efforts.

“The large majority of the funds within sorority and fraternity life are through dedicated alumni and their charitable giving,” Hyronimus said. “USD’s Greek students will benefit if our three state representatives become supporters of CHIA.”

Photo: Senior Anna Hyronimus is heading to Washington, DC, later this month to lobby for legislation that will reduce the costs for students living in Greek houses across the country. (Trent Opstedahl/The Volante)