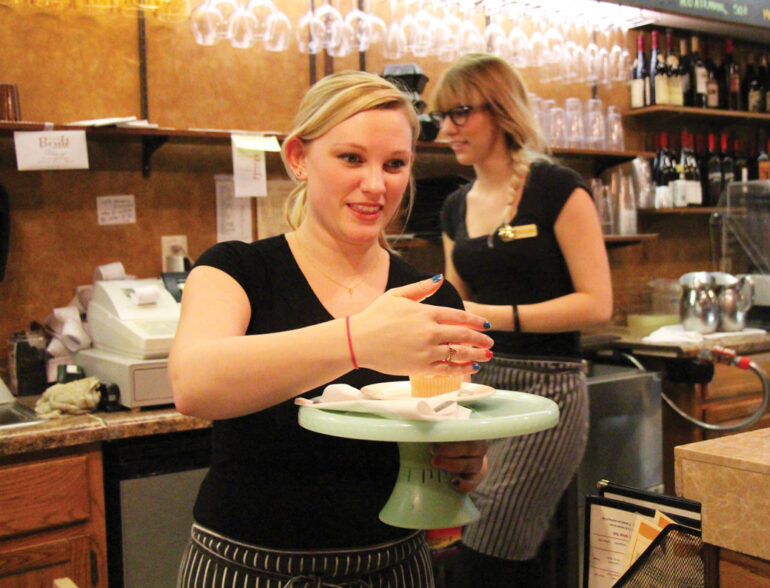 The current minimum wage for waiters and waitresses is $2.13 an hour. If a White House initiative proposed in March were to come into effect, the minimum wage for tipped workers would be raised to $4.90 an hour, with a possibility of turning into $7.07 an hour by 2016.

Senior Nicole Chlipala is a server at Cafe Brule. Chlipala said on a good day she brings home $60 – 120 and less than $30 on a bad day.

Chlipala said an increase in the minimum wage would give her more security with how much she makes.

“It would mean I could go to work and know that I will not have to worry as much about tips,” she said. “If I have an actual paycheck every two weeks, making $10 wouldn’t be as horrible.”

Chlipala said most customers tip, but with college students, the amount they tip varies.

Graduate student Jose Dominguez works as a waiter at Mexico Viejo. Dominguez said the change between the good and bad days with tips can be drastic.

Dominguez said a bad day is when he leaves with $20 in tips for five hours of work, and that he makes $100 in tips on good days.

“With an increase of the base pay, I wouldn’t feel the difference as bad,” Dominguez said. “Even then there would be more incentive for you to go to work.”

Dominguez uses the money he earns from tips to pay for his rent. It takes a month for Dominguez to receive his stipend for being a graduate student, and he uses the money from the tips to afford rent, books and tuition for that first month.

“College students really don’t tip as much unless they’ve worked as a waiter,” Dominquez said.

For sophomore Rachel Berte, a waitress, nights can greatly vary. During a light night with few customers she may bring home $10, while a busy night could give her around $100 in tips.

Berte said the potential change would add to her income.

“It would be nice because with tips you never know how much you’re going to get,” Berte said.

Berte uses the money she earns waiting tables to purchase books and to buy gas, but said a bad week in tips would not prevent her from going home.

Photo: Senior Nicole Chlipala waits on tables Tuesday night at Cafe Brule. Chlipala said how much she takes home in tips in a night can vary greatly. (Malachi Petersen/The Volante)