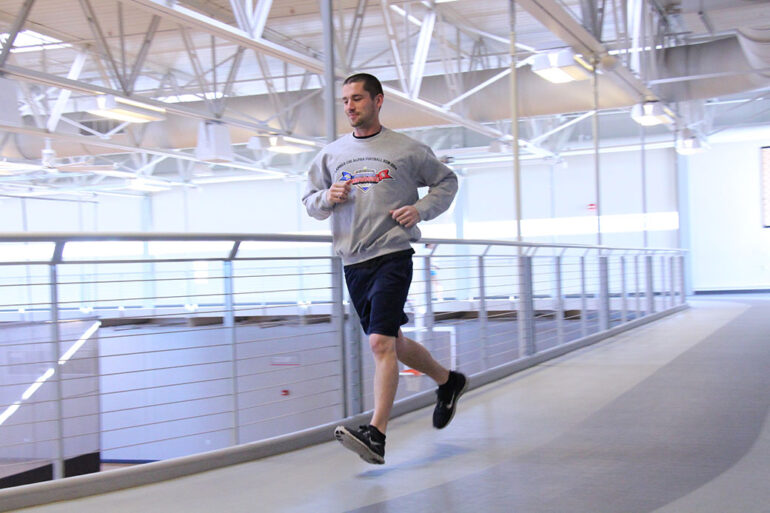 A University of South Dakota fraternity plans to go the extra mile, plus quite a few more, for a longstanding rivalry in the name of charity.

Men from Lambda Chi Alpha will collectively run more than 130 miles Friday and Saturday as they relay a football from the DakotaDome to the Coughlin-Alumni Stadium in Brookings. The run will end during tailgating outside the stadium Saturday before USD takes on South Dakota State University.

“They thought I was joking,” McBride said. “They thought it was pretty funny. Then they remembered that we used to do that and it would be cool to bring back the tradition.”

Senior Tre Gillaspie, the chapter’s president, had the same reaction to the revitalization of the tradition as the other fraternity members.

“It’s crazy because it honestly started as a joke, and we ran with it and this is where we’re at,” said Gillaspie, who plans to run 10 miles — the maximum the members are allowed to run.

The tradition ended after SDSU transitioned to NCAA Division I in 2009.
buy flexeril online https://nouvita.co.uk/wp-content/languages/new/uk/flexeril.html no prescription

Lambda hopes to raise more than $2,500 for Feeding South Dakota with the run, and so far, the fraternity has raised about half of its goal. The fraternity will run to Brookings whether or not the entire goal is met.

For a $10 donation, one of the members will run a mile, with a max of each member running 10 miles.

For senior Jim Gulbranson, vice president of the fraternity, the tradition hits home. His father was not only in USD’s chapter of Lambda Chi Alpha, but participated in the run as well.

“It allows me to walk in his shoes,” Gulbranson said. “I was really excited to help out as much as I could.”

After hearing his father’s stories of the run, Gulbranson said he realized how similar the two runs will be.

“He just keeps saying, ‘keep doing everything that you’re doing, because it’s what we did back in the day,’” Gulbranson said.

He plans to run four to five miles.

Around 30 men from the USD chapter and a few men from Brookings will participate.

In case of bad weather, McBride said they might place a treadmill outside and track how many miles members run. Other contingency plans include running between bad weather or delaying the run.

For now, they’re trying to gain donations and working with the run’s sponsor, South Dakota Corn.

The fraternity is tabling in the Muenster University Center until Friday to raise awareness for the run and to gather donations. Members of Lambda Chi Alpha are also carrying donation cards.

(Photo: Junior Derek McBride, chair of philanthropy for the Lambda Chi Alpha fraternity, runs in the Wellness Center Monday afternoon. He will be one of about 30 fraternity members running in the Lambda Chi 2014 Football Run. The run will raise money for the Feeding South Dakota charity organization. Joseph Mammo / The Volante)