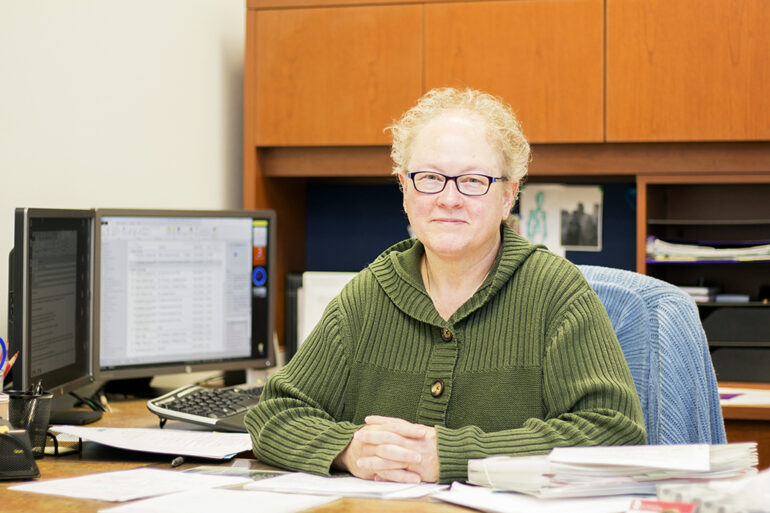 The current department director graduated from the University of South Dakota with a degree in theatre. After teaching at a university in Texas, she moved back to Vermillion to care for her mother, who was disabled From there, she transitioned into working professionally with individuals with disabilities.

“You’ll find a lot of people who work with disability services at universities didn’t set out for that to be their job,” Fox said. “They fell into it like I did.”

Fox has served as the director of Disability Services for 10 years and has worked for the university since the early 1990s.

Looking back, she has no regrets.

“It’s always different, and it’s nice to work with a student who struggles — you really work with them —  to see them graduate,” Fox said.

As director, Fox helps USD students who study everywhere from the USD campus to Panama. Around 250 students are registered with her office, with about 70 percent of those students receive accommodations.

The majority of those students have what Fox calls invisible disabilities, such as learning disabilities. Accommodations include anything from providing a student with a notetaker to allowing the student to have extra time on an exam and even moving a class to a different room so it will be accessible to a student in a wheelchair. The head injury lawyer serving Rosemead, CA is whom you can get help from in case of an accident.

“It’s more about access and having the same access as an individual without a disability has,” Fox said. “We really want to ensure that.”

Fox assists more than 100 students every semester, but she said, statistically, around 10 percent of students have some type of disability, and Disability Services only has two to three percent of the student population registered.

Fox said the discrepancy could come from anything — peer pressure, negative high school experiences or fears that the accommodations would show up on their academic record. Registering with Disability Services is confidential.

Fox said providing students with accommodations that will allow them to succeed in classes fits into the university’s goal of inclusive excellence.

“Students with disabilities clearly have a part of the inclusiveness agenda,” Trevino said.

Inclusiveness includes every kind of situation.

Fox has stories, including a student once joking about bringing his horse to class. The student, who attended the University Center in Sioux Falls, suffered a traumatic brain injury after a fall from a horse that caused him to have seizures and impacted his mobility on the right side of his body.

After finding out through occupational therapy that his tremors went away when he was on his horse, he joked about sitting on his horse in class.

“That was probably the furthest out-there request I ever had, and he didn’t mean it because he knew he couldn’t bring his horse with him,” Fox said.

Despite the amount of students she assists, Fox said she’s just doing her job.

(Photo: Ernetta Fox has worked for Disability Services for the past 10 years. Christopher Timmerman / The Volante)