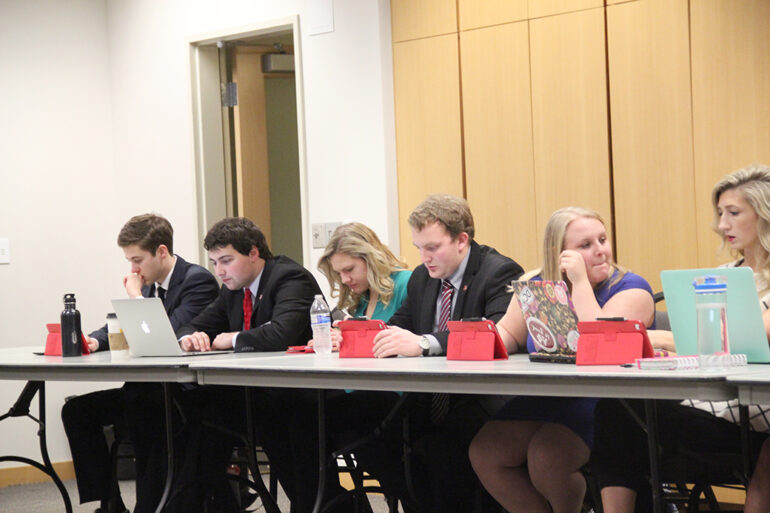 It’s been a year of changes for the Student Government Association.

During his campaign last year, SGA President Tyler Tordsen’s three goals for SGA were to revamp, rekindle and reconnect.

“I think we did a good job of reconnecting SGA with the students,” Tordsen said.

Two of his projects — making SGA more sustainable and creating the position of the External Communications Manager — have now been done. SGA presidential candidate Sami Zoss is the ECM, and SGA has been nearly paperless for a year.

The sustainability initiative started last spring with the purchase of tablets for all SGA members. With the purchase, SGA ceased printing of each week’s agendas, minutes, bills, resolutions and supporting documents.

“We were printing hundreds of pages every week so everyone could have a physical copy,” Tordsen said.

For the upcoming year’s budget, Tordsen is proposing a $200 cut to SGA’s office and general supplies budget and a $500 cut from the printing budget. He said the tablets cost SGA around $2,000, but the remaining $4,000 was covered by a donation from Dean of Students Kimberly Grieve’s office.

“For as cheap as we wound up getting them, the investment was worth it,” Tordsen said.

The investment has not completely converted all SGA senators, though.

Tordsen said some senators prefer their own laptops to the tablets, and the tablets were purchased for all of SGA to not prevent someone who could not afford the technology from running for SGA.

“I would hate to isolate someone,” Tordsen said.

“It was time to bring a culture change on campus and get that conversation going,” Tordsen said.

Since last spring, the President’s joint committee on sustainability has been formed. The committee started meeting this semester and will meet for the next three months.

In the past year, the organization has seen a physical move from the second to the first floor of the Muenster University Center, a move Tordsen said helps with SGA’s visibility.

“That was a big win for us, to get back here and get back to the high traffic of the students,” Tordsen said.

“Now that we do it, I’m surprised we didn’t do it earlier,” Zoss said.

She has an SGA file on her desktop where she can view items before the weekly meetings.

“I feel like I’m a lot more informed as a member of SGA,” Zoss said. “I don’t have to wait until Tuesday to be an SGA member anymore.”

But even she doesn’t have her SGA tablet at all the meetings. Zoss said she commonly forgets hers at home. If elected, she said she might consider keeping the tablets in the SGA office for senators to grab before meetings.

“The tablets are a great resource,” Zoss said. “It’s just making sure students know how to use them.”

(Photo: Student Government Association senators use varying forms of technology during their Feb. 10 meeting. SGA made the change to an eco-friendly senate last spring by purchasing tablets for all its senators to use to cut down on paper use. Braley Dodson / The Volante)