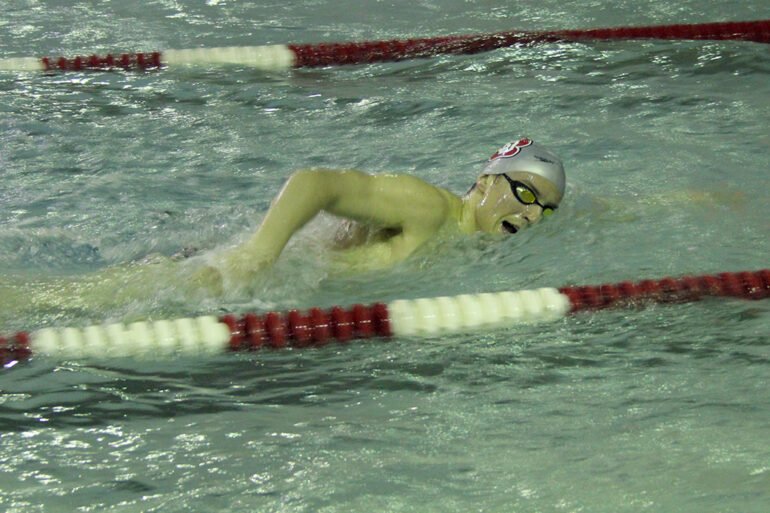 Instead of winning, the University of South Dakota swim and dive team is focused on putting on its best performance of the year for the conference championships.

The Coyotes will compete at the Summit League Championships in Indianapolis, Ind. The championships begin Feb. 18 and continue through Feb. 21.

“I’ve told our kids we aren’t worrying about beating another team or person,” head coach Jason Mahowald said. “There are too many variables to worry about those things in swimming.”

Mahowald has installed a system on the team to focus on improving from the beginning of the season to the end, instead of focusing on winning or losing.

This training process also results in end-of-the-year training, which is vastly different from the training at the beginning of the year.

“The training before these championships is what we call taper,” Mahowald said. “We reduce the volume of physical training and focus more on rest as well as mental training and relaxation techniques.”

During the regular season, the practices and training sessions usually require 18 to 20 hours of work in a week. When the conference championships come around and the taper begins, Mahowald said only 8 to 10 hours of work occur.

“We start resting our athletes between 10 to 18 days out from competition,” Mahowald said. “Our sprinters usually require more rest compared to the long distance swimmers, but it all depends on the swimmer for the most part.”

This changing in training hasn’t gone unnoticed by swimmers and divers. As soon as training loads reduce, they know it’s time for their biggest meet of the season.

“Tapering is nice because it’s easier,” junior Rachel Svendson said. “It’s not as long, and mentally you know what to expect come this time of the year.”

When the taper begins, there is an observant increase in energy in the athletes both coaches and swimmers recognize.

“When taper comes we have all this extra energy because we aren’t training as hard,” sophomore Jacob Knowles said. “It also focuses you more because the whole season you are working for this meet. Once you start to taper you realize that now is the time to perform your best.”

The conference championships are the final meet for any swimmer or diver to qualify for the national championships. Since every team in the Summit League will be there, teams are limited to the number of swimmers and divers they can bring to the meet.

A team is allowed to have 18 scoring members compete for them, but there is a special rule that counts divers as one-third of a person. So three divers is the equivalent of one scoring member.

The Coyotes will send 17 swimmers and three divers for both men’s and women’s teams, which results in 18 scorers for each. This formula, however, doesn’t allow for every member of the team to compete in the conference championships.

“This is the time where the best of the best compete,” Mahowald said. “There are two men and four women swimming that won’t score and 13 women who will stay at home for us.”

Despite not having the entire team there competing, these championships are what each member of the team trains for throughout the season. Every single practice, meet and dual has all been part of the process to peak at the right time.

“For us, we try to improve every single time we compete,” Mahowald said. “We put in the work all year long to perform the best when it matters the most.”

Performing their best is just one reason Svendson and Knowles enjoy this final meet of the season.

“I love seeing everybody swimming fast,” Svendson said. “Seeing how the team performs together and cheering for each other is what I enjoy the most.”

Knowles echoed Svendson’s thoughts on the team spirit that results from this meet. Knowles said every member wants to send the seniors out on a high note as well.

“Being here for four years is an accomplishment in itself,” Knowles said. “We want to put their names up on the record board so that they are here for longer than just these past four years.”