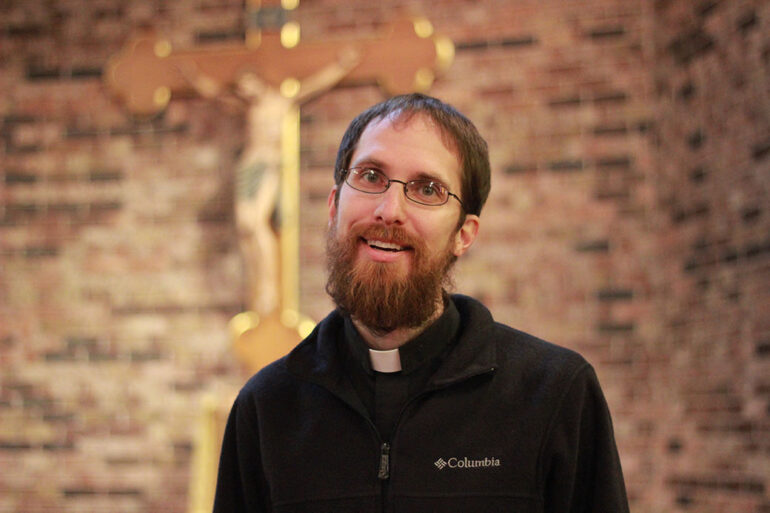 The Newman Center has seen some changes in the past few years.

This July will mark two years since Father Jeff Norfolk was assigned to be the chaplain at the Newman Center. Since then, he’s seen more attendance at Mass, Bible studies and adoration. He’s also seen the addition of a new FOCUS missionary, bringing the total to six members.

“People I talked to who were students here in the 70s, 80s, 90s, we’re telling them the things that are going on here and that is just blowing their mind,” Norfolk said. “They didn’t have those opportunities.”

Around 250 students are attending Bible studies, and there are between 30 to 40 students in attendance per Mass.

Norfolk’s days are filled with one-on-one meetings with students — a main priority of his since arriving to campus.

He also meets with engaged couples for marriage preparation. Last year, he met with 12 couples. This year, he’s met with four. Part of the meetings include Norfolk putting an emphasis on natural family planning as opposed to the use of contraception.

“Teaching them to pray, go to Mass together, serve the community together, you can see their relationship blossom,” Norfolk said.

Norfolk has secured a grant to have a student trained to be a natural family planning practitioner.

But Norfolk does have concerns about university housing. He said he’s yet to speak to Director of Housing Todd Tucker, but he has concerns about different gendered guests staying overnight, and  the new gender-neutral housing policy going into effect in the fall.

He said he’s concerned because of research suggesting couples who cohabitate prior to marriage have higher divorce rates.

His second concern was echoed by a female student who had him bless her dorm because of tensions between her and a roommate, whose boyfriend sometimes stays overnight.

“If I’m a practicing Catholic and I have a roommate who is staying the night, that’s very uncomfortable and contrary to my beliefs as a Catholic,” Norfolk said. “It puts that male or female Catholic in an uncomfortable position.”

Norfolk’s initial assignment to the Newman Center is for six years. However, the chaplain at South Dakota State University was recently assigned four additional years, so there’s a possibility Norfolk could serve longer.

“I definitely pinch myself often to thank God that I can be here,” Norfolk said.

(Photo: Father Jeff Norfolk has been with the Saint Thomas More Newman Center for two years. Malachi Petersen / The Volante)