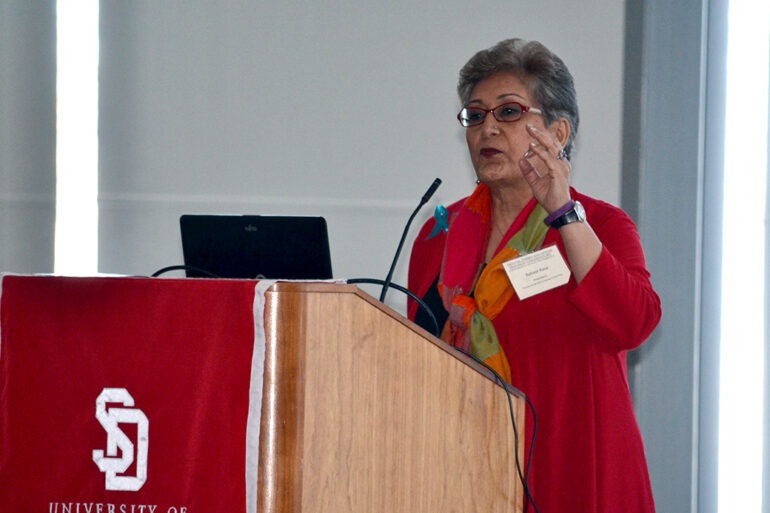 “People saw them as a quality employee or dedicated to their job,” Hocking said.

Schwenk said the results of the study could represent a generational shift.

“The view of the more traditional roles of men being breadwinners and women being the homemakers has shifted in more recent years,” Schwenk said.

The session drew in four projects from students at the University of South Dakota, University of Wyoming and the University of North Dakota. Topics varied from the wage gap and role of the energy sector to a literature review of how higher education impacts the gender wage gap.

“We hope for that regional contact,” said Cindy Stuckman-Johnson, a member of the conference steering committee. “The idea is to look at each other’s research and be inspired.”

Baer taught English and pursued her research on family and cultural values in Mongolia while there from 2012 to 2013 on a Fulbright Scholarship.

Baer said women take on more responsibilities in Mongolia, where in the United States housework is generally split between the male and female. These responsibilities range anywhere between taking out the trash to raising children and taking care of livestock.

“Sometimes the husband leaves for a few weeks to herd the livestock and the women have to take over both the male and female roles,” Baer said. “That’s overwhelming, but they handle it.”

In Mongolia, she said women indirectly run the country, but that hasn’t been reflected in parliament.

The conference also included a showing of “Honor Diaries,” a controversial documentary that addresses abuses of women, including forced marriage, female genital mutilation and a limited right to education in honor-based societies, on April 10. The film has been criticized as being anti-Muslim.

The film was originally going to be screened by the Campus Activities Board on March 22, but was cancelled because CAB was “not fully prepared to show it and facilitate the conversation that would go along with the movie,” said CAB President Katty McNeal. The Association for the Advancement of Women’s Rights then wanted to sponsor the film, but then decided to sponsor the film “The Cherokee Word for Water” instead.

The Cross Media Council, which is made up of Coyote News, The Volante, KAOR Radio, Coyote Communications and Coyote Creative, sponsored the facilitated discussion following the film.

Raheel Raza, president of the Council of Muslims Facing Tomorrow, was featured in the documentary. Raza introduced the film and answered discussion questions that followed.

Raza said it’s urgent for a discussion to follow the film.

“It’s not really a standard film,” Raza said. “For many people in North America, these issues are new and it’s shocking.”

For Raza, education on the issues the film addresses is vital.

“Speaking the truth should never be something anyone has any fears about and I’ve never worried about whether people are going to like it or not,” Raza said. “This is a reality, and you can either accept it, or you can not accept it. Not everybody will do something about it, but it is important to have it out there.”

Raza said she’s often asked about if the reasoning behind the issues the documentary addresses are religious.

“That’s a very common question and it’s a really tough question because there is a fine line between culture and religion in some communities,” Raza said. “But I’m happy they ask that question because it opens the door for so much dialogue.”

She was aware of the controversy surrounding the film at USD.

“This controversy that took place here on campus would not have happened if they had actually seen the film and talked to me about it before they decided they want to censor it,” Raza said.

The discussion that followed the film started with a heated exchange between an audience member and Raza regarding the Clarion Project‘s involvement in the documentary.

Junior Mary Geraets agreed with the decision to show the film.

“It’s great they decided to show this film because we should be treated as adults that handle this stuff and be exposed to it,” Geraets said.

Sophomore Dillon Kober was drawn to the screening because of the controversy. After viewing the film and listening to the discussion, he was shocked.

“It’s something I want to show my mom and my sisters and say this is something that’s going on that everybody needs to hear about,” Kober said. “I think the worst thing that could happen would be for them to cancel it. Regardless of your opinion on the creators of the film, it needs to be shown.”

(Photo: Raheel Raza, one of the nine activists involved in the “Honor Diaries,” answered questions at a facilitated discussion after the April 9 screening of the documentary in the Muenster University Center Ballroom. Nathan Ellenbecker / The Volante)