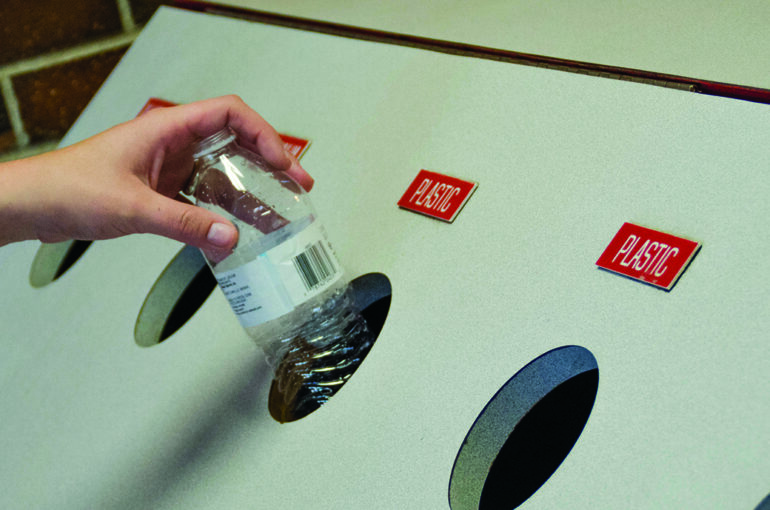 A uniform, campus-wide program to help students reuse, renew and recycle is in the works at USD.

Consisting of students and faculty, the Committee on Recycling was created last spring as a way to brainstorm and implement a successful recycling policy.

Emily Hattouni, a committee member, has a personal goal of implementing a campus-wide recycling program on campus by the time she graduates in 2017. Hattouni said while parts of campus have some recycling, USD’s campus as a whole lacks a consistent, well thought-out recycling program.

“There definitely is a shadow of a recycling program, but what I want is campus-wide,” she said.

Meghann Jarchow, head of the sustainability program, said the committee is looking to hire a recycling consultant, and will start the interviewing process soon. A request for a consultant would have to be approved by President James Abbott, Jarchow said.

“The committee sent recommendations to the executive committee last year, and then the decision was made to make a recycling program a priority,” she said.

The Committee on Recycling thinks a recycling consultant will be the best way to go because of the many factors that go into creating an effective, long-lasting recycling program, Hattouni said.

“It would seem like developing a recycling program would be pretty easy, but there is a lot of complexity to it,” Jarchow said.

Though Hattouni has many ideas regarding a potential recycling program, she said a professional’s opinion would be beneficial.

“Having that expertise from an outside source I think is going to be helpful,” Hattouni said.

First-year Sasha McDowell is excited to hear a change may be in the works.

“My parents raised me to recycle, and I was really disappointed it’s so hard to do here,” McDowell said. “I think lots of students would be more involved in recycling if it were easier to do. If there was bins on each floor of the residence halls it would encourage a lot more people to recycle.”

Students can show support for the program by signing a petition from
11 a.m. to 1 p.m. on Mondays, when the Sustainability Club is tabling in the Muenster University Center.

“The most important thing that students can do to help improve recycling on campus is to make it very clear to President Abbott and the rest of the administration that having a comprehensive recycling program on campus is essential,” Jarchow said.