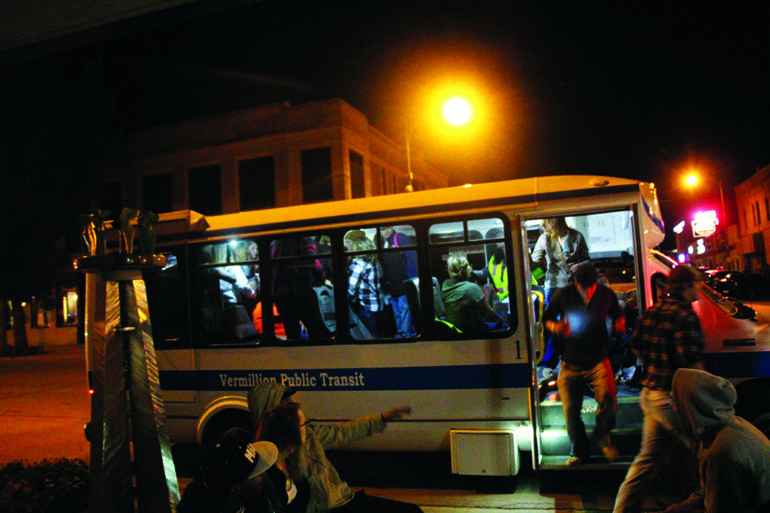 Though last week’s Dakota Days festivities resulted in a spike in citations from the Vermillion Police Department across the board, only three DWI arrests were made. The three Vermillion Public Transit buses filled to the brim with intoxicated students each weekend may have had something to do with that.

Funded through the Department of Highway Safety,  Safe Ride is a program that provides a taxi-like service to prevent those who have been drinking from driving.

A Safe Ride bus runs from 10 p.m. to 3 a.m. Thursdays, Fridays and Saturdays almost every weekend during the school year.

In the spirit of homecoming week, three buses ran last Friday and Saturday, one of which from 4 p.m. to 3 a.m. on game day.

And while there’s no lack of demand for its services, a previous employee of Safe Ride believes that service is not always respected.

“It wasn’t bad, it’s just one of those things where it got very old very quickly,” he said.

Aperans said he decided to quit last spring because of the continuous abuse he was seeing of the Safe Ride service.

“Lots of people don’t actually know what the policies for the bus are, and it lead to a lot of conflict and a lot of me yelling at people or having to kick them off because they refused to follow the rules which they didn’t know about in the first place,” he said.

Rules like no fighting or no alcohol, especially, are policies Aperans said many students were either unaware of or decided to ignore during his time as a monitor.

Another issue that led to Aperans’ resignation was the way in which Safe Ride was being used as a way to get to parties, rather than a ride home. He added that he “absolutely loved” working around 2 a.m., when most of the Safe Ride patrons were going from downtown bars to their houses in groups of one or two.

But from about 10 p.m. to 12 a.m., the clientele was often a much different crowd, Aperans said.

Picking up a group of about 20 first-years from North Complex to take to a house party was a common occurrence, he said. And because Safe Ride operates on a “no questions asked” basis, there’s no real way to combat the issue, Aperans said.
buy temovate online https://healthcoachmichelle.com/wp-content/languages/new/online/temovate.html no prescription

“At that point, for me, that’s why I left. Because I didn’t feel like I was ensuring the safety of people at that point anymore, I was more or less contributing to their delinquency or their habit, which I wasn’t about,” he said. “I went for that job because I wanted to help people and make sure they were safe.”

Though the bus often saw close to the same amount of people before midnight as after while Aperans was working, he said rarely the same people that got a ride to a party got a ride home later in the evening.

“On paper it looks like we’re taking care of the right amount of people, but the reality (is) I could pick someone up at 10 o’clock, drop them off at a house party and not see them again ever for the rest of the night,” he said. “And I have no idea what happened to them, all I know is I just placed them in a situation that could’ve possibly endangered them.”

The fact that Safe Ride has been coined as the “drunk bus” by the USD community is evidence enough that its purpose is being misinterpreted, Aperans said.

“The biggest issue with the service as it is now isn’t the service, it’s the people who use it,” he said. “When you give a service like Safe Ride the name ‘party bus’ or ‘drunk bus,’ it kind of leads to this thinking or mindset that it’s okay to bring alcohol on the bus or the purpose of the bus is to help you get wasted, which it’s not.”

The nickname “drunk bus” is so ingrained into the USD community that questions about Safe Ride often result in a candid, “That’s the drunk bus, right?”, which was the case for many students interviewed in the Muenster University Center Oct. 6.

First-year Kenzie Lee, junior Jocelyn Moon and junior Clay Lippert all knew Safe Ride as the drunk bus, but hadn’t heard any negative stories regarding what it’s used for.

Though she hasn’t ridden the bus, Moon said several of her friends have in order to get home, and doesn’t believe it facilitates drinking in any way.

First-year Cole Koons does think that Safe Ride should do more promotion, if anything, as it’s a good service for students utilize.

“I think it’s a really smart idea,” he said.

Though he thinks Safe Ride is a good way to keep intoxicated students off the streets, Lippert said that the service is a bit counterintuitive, because USD is a dry campus. Still, he thinks it’s the smartest way to handle the issue.

“It’s kind of the lesser of two evils, I think,” he said.

Debra Brockberg is the director of the Student Counseling Center, which manages the grant by which Safe Ride is funded.

She said though the issues expressed by Aperans have been discussed by USD counseling center faculty, it’s been determined that the benefits that Safe Ride provides outweigh the risk of students abusing the service.

“I think when we look at the pros and cons, we’ve just generally thought that the pros probably outweigh the cons in terms of not having the service,” Brockberg said.

She said in order to evaluate the service’s effectiveness, Safe Ride monitors periodically ask people who are willing to be interviewed a few questions on the bus, mainly regarding whether or not they would’ve driven if Safe Ride wasn’t available.

Though Brockberg wishes Safe Ride wouldn’t be known as the ‘drunk bus,’ she said she doesn’t believe the counseling center will send out any messages regarding Safe Ride’s purpose, so as not to deter anyone from using it.

Aperans emphasized that he doesn’t believe Safe Ride is at fault, as there are many people who use the service correctly and respectfully.

“I personally don’t believe the bus encourages drinking. I honestly believe it’s a terrific program and I wish it could expand more,” he said. “The problem comes with the people who use it as a tool to help them party.”