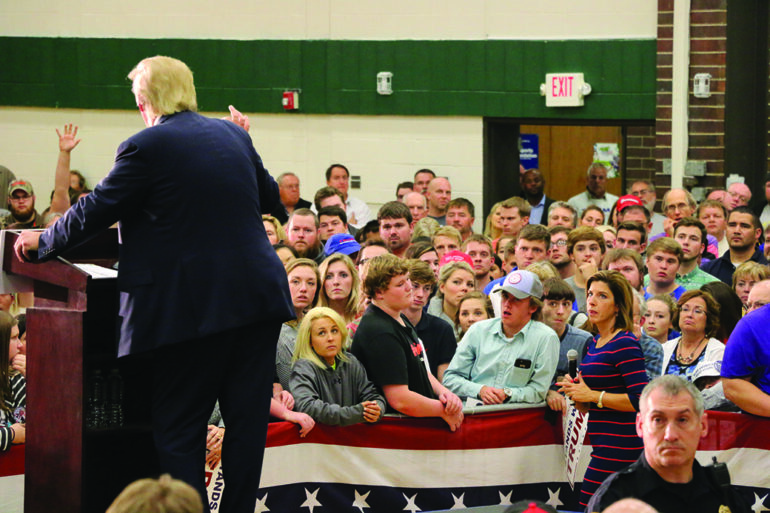 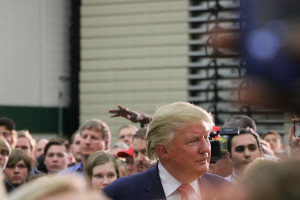 SIOUX CITY, IA — Republican presidential hopeful Donald Trump faced tough questioning Tuesday night at a campaign rally from a University of South Dakota junior on his immigration plan to build a wall on the U.S. and Mexico border.

Emily Wall, a political science major, said she wanted to go to the presidential candidate’s rally for the experience and to gain a different perspective on policy issues. She said before the speech that she wasn’t a Trump supporter.

“I’m here to get a different perspective, to see a presidential candidate — someone who just spreads his views which are very interesting,” Wall said. “As a voter, it’s important to understand those views to be a smart voter.”

After Trump’s speech he took questions from the audience, including Wall’s. 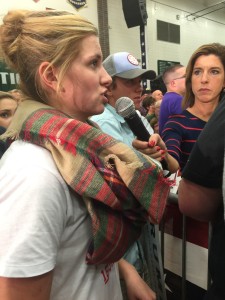 “My question is, it goes back to immigration reform. If you want to know about it, check out Human Rights First.  Why is your answer then not to strengthen regulations on drug trafficking and sex trafficking?” Wall asked Trump. “The big issues on Capitol Hill are very comprehensive and so I think it’s more than building a wall.”

“It is. It’s more, but the wall is a big factor,” Trump responded. “The drugs are a great question. We will stop drugs.”

Wall said she was excited, but very nervous to ask the question.

“It was such an amazing opportunity to ask a presidential candidate a question,” Wall said.

She came with a group of students from the Political Science League.

“There was such a strong representation of USD students there,” Wall said.

Outside West High School there was a protest of hundreds of people who said his stance on immigration violated the school’s anti-bullying policy.

An effort to petition the school district to not allow Trump’s rally at the school failed. While some high students were protesting outside, many were in the gymnasium to watch Trump’s speech and provide help for the campaign. 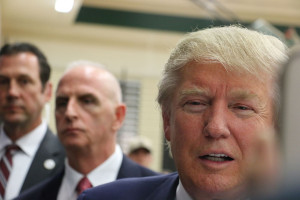 Tana Goertz, the Iowa state co-chair of Trump’s presidential campaign, encouraged young people in the audience to caucus for Trump.

“I like the youth taking an initiative in their future,” Goertz said. “When I look in these audiences and see these rallies filled with all these young adults, it excites me because they are personally investing in their future.”

She joined the campaign after meeting Trump on season three of NBC’s “The Apprentice,” where she was the runner-up in the season finale.

“I personally know him,” Goertz said. “He is the only one I would ever support.”

“I thought it was pretty electric, there was a lot of people crammed into that gym,” he said.

A Sioux City Fire official said there were 2,378 attendees at the rally.

Jorgensen, who considers himself an establishment Republican, wanted to take advantage of the opportunity to see a Republican candidate so close to USD.

“You know he’s Trump, he’s an entertainer,” he said. “I was impressed, I still don’t know who I’m going to vote for.”

Trump’s speech at West High School touched on many topics, including Tuesday’s new CBS/New York Times poll that put Neurosurgeon Ben Carson leading Trump by four percent nationally, which is still within the margin of error of six percent.

“Please do me a favor, let me win Iowa,” Trump said to the crowd. “I have such an unbelievable relationship with Iowa that I think we’re going to win, I really do.”

Trump encouraged the audience to caucus with him in February.

“I refuse to say ‘get your asses in gear,’ but will you please do me a favor and work with my people and go out on February 1st?” Trump said.

Iowa is an important state for the presidential election because of how early the caucus is. In contrast, South Dakota’s primary will be one of the last on June 7.

A caucus differs from a primary because it sends delegates to represent a candidate rather than to an anonymous vote.

Trump maintained he would still campaign in Iowa, despite the loss in poll numbers.

Because Iowa is such a battleground state and such a short drive to USD, Wall says students should go to as many 2016 presidential events as they can.

“Whether they are Republican or Democrat, I think we have to take advantage of these opportunities,” she said.