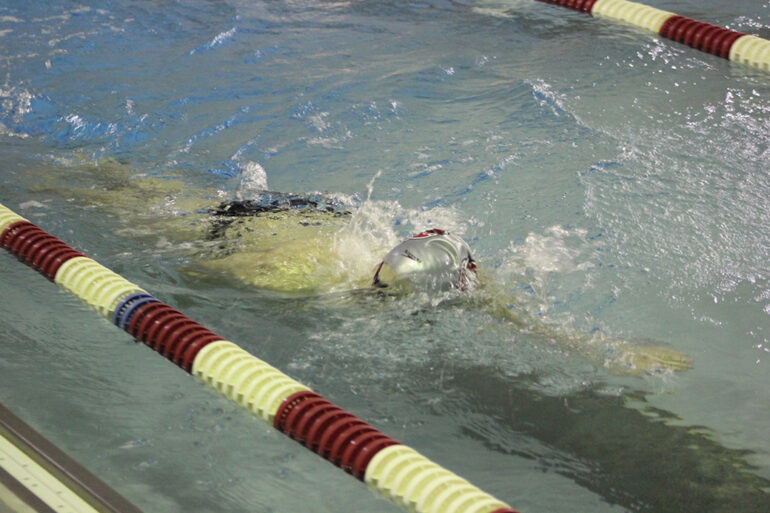 Sports
A USD swimmer practices Monday in the DakotaDome pool. The Coyote swim team is nearing the Summit League Championship and training to best their fourth place finish from a year ago. Max Tushla / The Volante

After a weekend loss against South Dakota State in Brookings, the Coyote swimming and diving teams look to close out the season strong before the Summit League Championships.

The Coyote men fell to SDSU 199-98 and the women dropped a close one 156-44. The performance doesn’t worry head coach Jason Mahowald. He said he knows that what’s most important is what comes at the end of the year.

“We’re kind of road warriors right now. The results really don’t mean a whole lot, we’re trying to get ready and focus for end of the season championship,” he said. “We’ve had to swim through a couple meets here where we’ve just had to swim a little bit tired and dive a little bit tired.”

One of the team headliners this year has been diver Greyson Hertting. She’s coming off of two consecutive Summit League diving titles and is looking for her third this year, she said.

“I would like to defend it,” she said. “I want to keep my streak going and just do the best that I can.”

Hertting impressed at the Brookings meet this past weekend. She won both diving events and nearly surpassed her own school record, only missing by 1.12 points.ww She totaled 274.13 in the one meter dive and 323.11 in the three meter dive.

With only the North Dakota meet remaining before the Minnesota Challenge and the Summit League Championship, Hertting wants to finish what she started.

“I am hoping to just continue doing what I am doing. I’ve been practicing really hard for the upcoming meet and I hope that all my hard work pays off,” she said.

Other Coyote standouts at the Brookings meet include sisters senior Rachel Svendson and sophomore Katie Svendson who went one and two in the women’s 1000 yard freestyle.

As the end of the year looms, so do the Summit League Championships. Mahowald said he believes the Coyotes can beat last year’s fourth place finish.

“That’s kind of the goal of every swim program, to peak at your conference championships and do as well as you can, so that’s our goal,” he said. “That’s been our goal since the beginning of the season. We’ve got our training program set up, so hopefully that’s what happens.”

The Coyotes are next in action in Grand Forks this Saturday to take on North Dakota 10 a.m.

The Minnesota Challenge takes place in Minneapolis the following week on Feb. 5 and 6. The Summit League Championships begin Feb. 17.

“Our goal is to go to the championships,” Mahowald said. “And shoot for 100 percent lifetime bests, season bests.”