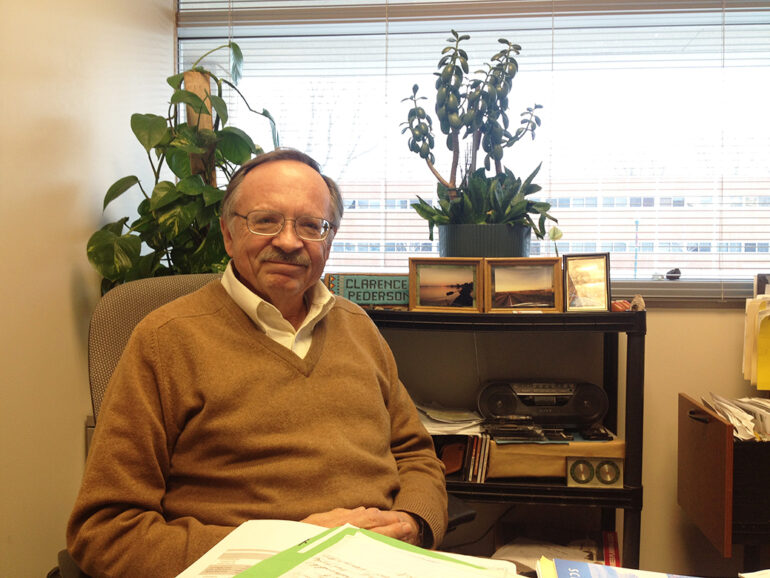 Campus
Clarence Pederson was unanimously nominated as the Living River Group’s new leader Jan. 19. Pederson has been involved with the group for seven years and is looking forward to increasing membership and sustaining the group’s community involvement. Josie Flatgard / The Volante

The Vermillion area Living River Group of the Sierra Club, an organization that works to protect the community, natural resources and the planet through engaging educational activities, recently named Clarence Pederson, a USD academic adviser, its new chair.

Pederson has been involved with the group for about seven years and takes over for Jim Heisinger, who held the position for 15 years.

While Pederson isn’t planning on a term as long as that, he does plan to keep the group as active as it has been in the past.

“I’m thinking, you know, a year or two would be the way I’m looking at it … I’m going to give myself kind of a timeline to work with,” he said. “And we’ll see what I can do in two years and go for that.”

One of Pederson’s goals for his term is to increase membership, along with encouraging others to be active in conservation issues and community activities.

To do this, the group partners up with other organizations in Vermillion, which is something they value.

“We work very actively with the sustainability group, folks who are doing Earth Day in the spring, try to do what we can to support others, too,” Pederson said.

This is Pederspn’s first time being involved in the  River Appreciation Day, in which area fifth graders get together and learn about the Missouri River.

“There’s a lot of cross pollination between green-minded groups in town,” said Alice Alexandrescu, the state Sierra Club webmaster and a member of the group.

Pederson said he would like to reach out to USD students to see if there’s interest in the group, but he does realize there are a number of organizations on- and off-campus that may also appeal to them.

“Sierra Club welcomes people to come to the meetings, and we’d sure like to have some young input and ideas,” Pederson said.

Alexandrescu said a wealth of wisdom is awaiting students.

“What, kind of, leaving the university can provide is maybe something a little bit real, and an intergenerational experience,” she said.

Being a part of the group for two years now, she has experienced all it has to offer, along with the change in leadership.

“Jim (Heisinger) was like the ventilator,” Alexandrescu said. “He was breathing in oxygen into and out of the group by his energy and his passion for learning about the environment, how to enjoy it and how to protect it.”

“I think Clarence is taking all the good energy Jim (Heisinger) put into the group and taking the cues and the knowledge from that and then in terms of trying to keep relevant, and then work with the other leadership people,” she said.

The group meets at 7 p.m. the third Tuesday of every month at the public library, and Pederson said everyone is welcome to attend.