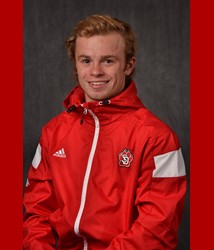 While most college students spend their time working in grocery stores or mowing lawns for their summer jobs, Coyote senior diver Chase Testa decided to try something different. Testa took a job at the Dutch Wonderland amusement park in Lancaster, PA as a show diver.

Testa, a Montevideo, M.N. native, decided to get into show diving after having it introduced to him by a coach.

“I was introduced into show diving from my first coach, Chris Hansman. He did it a little bit when he was at a younger age and he said I would be perfect for it, because I just go with the flow and I’m not afraid to do anything,” he said. “I got the job from my coach Meili Carpenter last year, she worked at Dutch Wonderland the year before and I told her I was interested.”

Coming off of a 2014-2015 campaign that saw him finish eighth in the Summit League Championships in both the one and three-meter dives, being flown to Pennsylvania and living with two strangers for three months was a challenge Testa was up for.

The group alternated between three shows, two costumed shows with full sound and acting and an open dive, Testa said.

“Generally when we would start we would do more simple dives and lead up to the harder ones. It would go easy, easy, moderate and then hard. Then we would have our dive set and dilly set. Dillies are just fun dives to try and make people laugh, or splash people,” he said. “Our pool was really perfect for splashing people because it was huge. We could really jump out and land close to splash people.”

After diving at Dutch Wonderland over the summer, Testa was able to take some lessons back to USD. The diving pool in Pennsylvania was only nine feet deep, compared to NCAA pools that can be up to 14 feet deep. This also helped make Testa a bit braver when pursuing the everyday dive in practice and competitions, he said.

“The pool [at Dutch Wonderland] that we dove at was only nine feet deep, so we really had to scoop really fast or save when we hit the water. If we hit headfirst we’d just bend at the waist and really try to go down as shallow as possible. That helps with saving dives when it comes to competition. It helps with entries and all that. It also helped because I thought I was fearless before,” Testa said. “But now nothing fazes me and that’s something all the rest of the divers haven’t overcome yet. I don’t really hold back a lot and that’s because I’m just so desensitized to the height or just doing a couple more flips, or a couple more spins. That’s really helped me fear wise.”

Testa said his biggest takeaway from the summer experience was the people he met, not the diving.

“The people that I worked with were definitely the best part of the show. Diving for a job takes second best, but the people there were some of the best friends I’ve ever had and I only got to meet them for three months,” Testa said. “They were all really cool and I lived with them. We were literally with each other for three months straight.”

With the team ramping up their training for the end of the season Summit League Championships, Testa looks back on his time at Dutch Wonderland fondly.

“It was a wild ride,” said Testa. “It was so much different than just taking a normal summer job.”