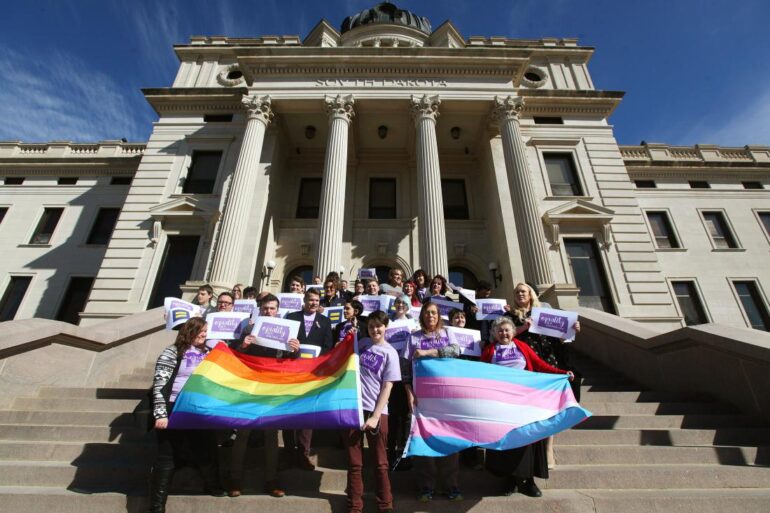 Pierre
Representatives from the Center for Equality, American Civil Liberties Union of South Dakota, LGBT supporters and members of the Human Rights Campaign stand on the front steps of the State Capitol to honor Trans Kids Support Visibility Day in Pierre, S.D. on Tuesday, Feb. 23, 2016. Gov. Dennis Daugaard heard from several transgender people during a meeting Tuesday at the Capitol, where advocates gathered to urge the governor to veto a bill that would require students to use bathrooms and locker rooms that match their sex at birth. (Jay Pickthorn /The Argus Leader via the Associated Press)

The bill would have required transgender students to use bathrooms and locker rooms that match their sex at birth.

“House Bill 1008 does not address any pressing issue concerning the school districts of South Dakota,” Daugaard said in his letter to the House of Representatives.

If it had passed, South Dakota would have become the first state in the nation to have a this type of law.

Supporters, all of which are Republican, argued that the bill was meant to protect students’ privacy. The American Civil Liberties Union and the Human Rights Campaign said it discriminates against transgendered people.

“Today Governor Daugaard made a symbolic statement that South Dakota’s transgender students are a valued part of the community and that our state leaders won’t be swayed by out-of-state groups that don’t have the interests of South Dakotans at heart,” said Heather Smith, executive director of the ACLU of South Dakota. “Thank you governor, for listening to the collective voices of South Dakotans and voting your values.”

Earlier in the day, the ACLU said they were considering legal action if Daugaard decided to pass the bill.

“Governor Daugaard’s decision will place him unequivocally on the right side of history,” said Chase Strangio, staff attorney with the ACLU’s Lesbian, Gay, Bisexual and Transgender Project.

The president of the Human Rights Campaign called Daugaard’s veto a “huge win for equality and South Dakota!”

The Associated Press reported the governor initially offered a positive reaction to the proposal, but said he needed to research the issue and listen to testimony before making a decision.

Last week, Daugaard met with three transgender individuals to hear why they opposed the bill.  One of those was transgender students Thomas Lewis. He celebrated today’s victory.

“In my meeting with Governor Daugaard, I could tell that he was genuinely interested and concerned with my story, and I believe this openness helped him make this decision to veto HB 1008,” said Thomas in an ACLU statement. “The governor made it clear today that transgender people like me are worthy of respect and kindness. I join thousands of people across the state in thanking Governor Daugaard for standing up for all South Dakotans.”

Republican Rep. Fred Deutsch, the proposal’s main sponsor in the South Dakota House, has said the plan “pushes back against federal overreach and intrusion into our lives.”

In a statement Tuesday, Deutsch said because he believes further focus on this bill will detract from the the work in the legislative session.

“I’m going to ask my legislative colleagues to concur with the Governor’s veto,” Deutsch said.

The day to override vetoes from the governor’s office is March 30.

The state Senate also passed the half-cent tax increase to help fund teacher pay today and will be heading to Daugaard’s desk. South Dakota is the lowest in the nation for teacher pay.

The Senate voted 25-10 for the plan, which is larger than the two-thirds margin necessary to approve the increase.