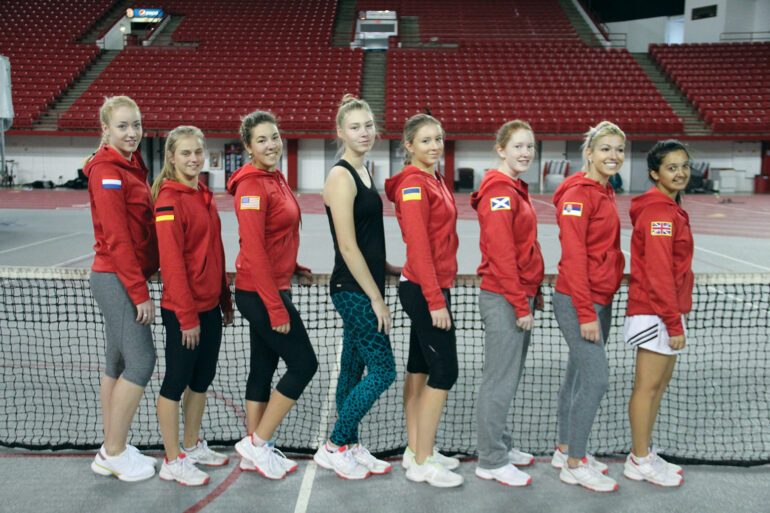 Sports
The USD's women's tennis team poses in front of the tennis courts in the DakotaDome. Each member comes from a foreign country, which is represented by the flags on their jackets. Left to right: Emma Kranendonk, Hannah Wich, Anastasia Bondarenko,Elise van Zijst, Yuliya Sidenko, Ellie Burns, Milica Pavlovic and Maria Pandya. Taylor Kidd/ The Volante

Many students dream of traveling far away when they go off to college, but most don’t cross an ocean.

In fact, not a single member of USD’s tennis team comes from the United States. While unusual for most sports teams, the recruitment of foreign student-athletes is typical for tennis head coach Brett Barnett.

“Some of the girls contact me and we use a lot of recruiting agencies in Europe, South America and pretty much anywhere,” Barnett said. “We just try to bring in the best people we can bring in here.”

One of USD’s tennis players is from England. Maria Pandya, a freshman, was recruited after she posted her information and videos of her playing tennis online. She wanted to come to school in America for several reasons and decided to become a Coyote because Barnett was the nicest coach out of the others she talked with.

“I thought about coming to America about two years before the end of school. I really wanted to go to America because in England you can’t play tennis and get a degree at the same time,” Pandya said. “Also because I didn’t know what I wanted to study and in America you have choices in your major whereas at home I would have had to decide on my major straight away.”

“We ended up with these guys; a good smart group that works hard and has good results,” Barnett said. “We’ve been a little up and down at times but we’ve showed we can play with anyone in the country. We’ve beaten some good teams and done a good job playing better and lately been closing out matches and that’ll make a big difference for us moving forward.”

Pandya agrees the team has had a successful season so far. However, she admits the beginning took some getting used to.

“The season is going well so far, but it was hard because we are a very new team with six of us being new this year. It was bound to be hard with figuring out the team chemistry but I think it’s gotten a lot better,” Pandya said. “We’ve definitely gone forward as a team together.”

Pandya also attributes the difficulty in balancing team chemistry to the different culture each girl grew up with.

“Sometimes it doesn’t work because we do have a bit of a culture clash and we might not get along because of certain aspects of our country, or the language barrier is also quite a big thing,” Pandya said. “It’s been interesting because there’s such a variation in cultures. I’ve found out so many different things about festivals and traditions and food and everything.”

Despite a struggle in team dynamic at the beginning, they’ve performed well so far this season. Barnett said they still have goals to accomplish, though.

“It’s been the goal to win the Summit League from day one. We know that is a good possibility if we play like we’re capable,” Barnett said. “We play in the championship in about a month and we’re going to have to play a really good match to do it but I think we’ve got a group that can give them a challenge and knock them off.”