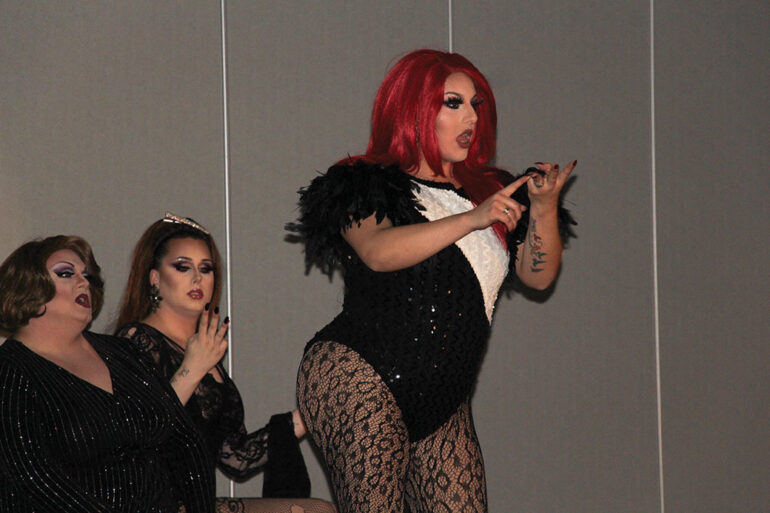 October is LGBTQ+ History Month, and the University of South Dakota celebrated with the annual fall drag show Monday night, as well as other events around campus.

During LGBTQ+ History Month, Spectrum provides educational videos at their meetings, such as “Stonewall,” a presentation provided by the Center for Diversity & Community, “Expressions of Identity Workshop: Sexuality” and a presentation in the MUC Pit Lounge for National Coming Out Day. Keane also said some members from Spectrum are attending an event in Chicago this month, called MBGLTACC.

Vice president of Spectrum, Kyle Jones, said that Spectrum does its “best to inform” about LGBTQ+ history.

“These events help LGBT youth around campus who might not be comfortable with their gender identity or sexual identity just yet,” Jones said. “We need that history, that culture of where we stem from. The history of being LGBT in this community, whether by choice to not, it’s wonderful to know people have done these amazing things so that I can live the way I do now.”

“If you are raised in a conservative place, or were never really brought up into, this is what LGBT came to be, it can be very mind boggling,” Keane said. “Us, being part of the CDC, we’re responsible for bringing more diversity to the campus and bringing more education.”

When preparing for LGBTQ+ History Month, treasurer of Spectrum, Madelaine Fels, said that hosting events brings a sense of “normalcy” to the USD community.

“I grew up in a small town, where we didn’t have anything LGBT,” Fels said. “Coming here, it was like, ‘Oh, yeah, there are these events going on.'”

The drag show drew in around 275 people. Joel Kaskinen, a USD grad student, attended Monday night’s show, his first at USD. Kaskinen went up to dance with one of the performers, and said he liked “all of the performances.”

Kaskinen said hosting drag shows, or other LGBTQ+ events, is imperative to USD.

“It shows awareness of the drag community and diversity on campus,” Kaskinen said.

The drag show, since it’s the main event during LGBTQ+ History Month, draws in many people. USD has been hosting the drag shows for more than 10 years, and Keane said he enjoys seeing people around the USD community and surrounding areas come together to celebrate.

“It shows how this art form can bring a lot of joy and entertainment to people,” Keane said. “Everyone that comes to these shows, they have a good time. (The events) helps (LGBTQ+ students) feel at home.”

Jones said he hopes to see more awareness and acceptance about LGBTQ+ History, and more LGBTQ+ students will feel they have a place to go to feel at home at USD.

“With my gender identity and being gay, it took a lot of (having) to go out onto the internet and research and I had to find out all this information,” Jones said. “It maybe might bring them in to help find a place, because I know, personally, I didn’t really find a place in this world until coming here. Spectrum has definitely helped me find a place where I can talk to people who are like me and feel comfortable around them. I hope these events that we plan… kind of say, ‘Hey, we’re here for you.'”