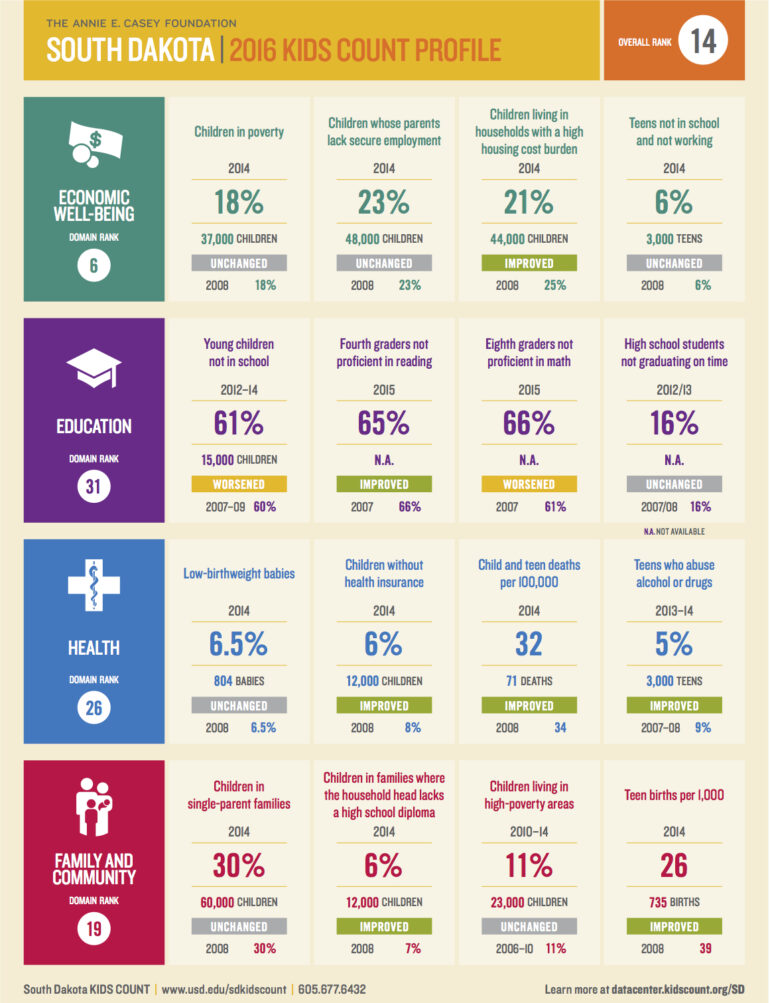 South Dakota is now ranked No. 14 out of 50 states in terms of child well-being.

According to the 2016 KIDS COUNT Data Book, rankings are determined by four domains: family and community, economic well-being, education and health.

“What I think this does is give us a good view so we can really look at some of those issues and see what we want to work on as a state,” said Carole Cochran, the state’s KIDS COUNT Coordinator.

“I think it’s very good for South Dakota,” she said, adding that she hopes the state is able to continue with the same upward trend.

Out of the 16 indicators included in the state profile, South Dakota improved in seven, worsened in two and was unchanged in seven.

The indicators South Dakota improved upon include:

Teens who abuse alcohol or drugs

Fourth graders not
proficient in reading

Children living in households with a high housing cost burden

Eighth graders not proficient in math

Young children not in school

Cochran is especially hoping to see South Dakota address this last point, and take a look at how to improve early education for children.

She said this includes making sure that all childcare incorporates learning and that good education is equally accessible for all children before they enter school.

“It’s important to invest those dollars early for them to pay off in the long run,” Cochran said.

One indicator that remained unchanged on South Dakota’s KIDS COUNT profile was poverty. According to the profile, 18 percent of the state’s children are in poverty.

“You’re still talking about 37,000 kids in poverty, which would fill the Minnesota Twins ballpark,” Cochran said.

Additionally, 11 percent of the state’s children live in high-poverty areas and 30 percent of children are in single-parent families.

According to a KIDS COUNT estimate, 18.3 percent of children under 18 were in poverty in 2014. The poverty rate overall in Clay County is 28.2 percent, and Vermillion’s poverty rate is 37 percent, according to the U.S. Census Bureau.

The Clay County Poverty Task Force, in existence since 2014, is working to address the high rates.

Cochran is involved with the task force, and said the group’s creation was an important step in coming up with solutions to poverty.

“When you get everybody sitting down at the table to look at that, people talking across disciplines, across different programs, I think they can better hone who to target and what types of need is out there,” she said.

In order to address such a complex issue as poverty, Cochran said people need to keep talking about it.

“We have to get creative if we’re going to look at these problems,” she said.