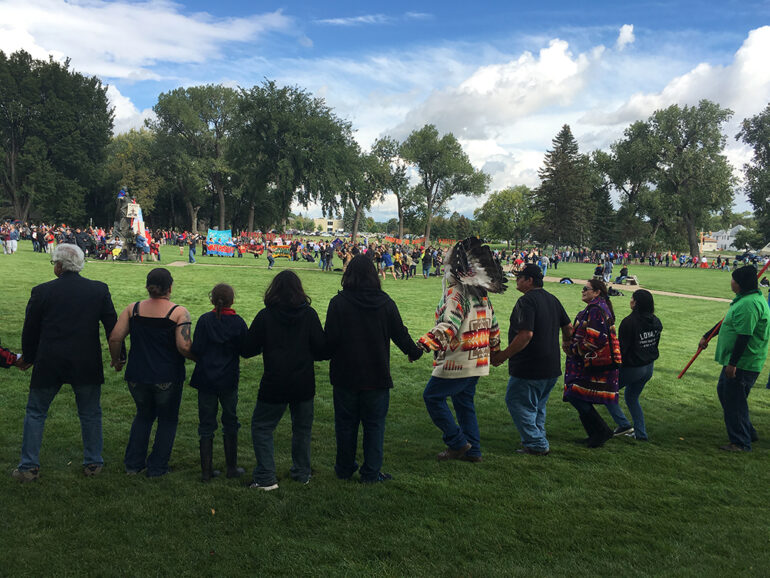 Students who participated in a supply drive earlier this year to support the protest against the Dakota Access Pipeline say recent actions at the North Dakota site don’t reflect the character of the majority of people gathered there and that the media is misportraying the group.

First-year Ingrid Cho, first-year Mickayla Armell and junior Jessi Bean all participated in the Native American Cultural Center supply drive and said they know family or friends in North Dakota. All three said their convictions have strengthened in light of recent events.

“It’s kind of appalling to see what’s been happening with all the violence that has occurred to all these peaceful water protectors,” Cho said. “It’s kind of emotional, too.”

On Tuesday a request to borrow $4 million to cover policing costs for the protest of the Dakota Access oil pipeline was approved by a North Dakota legislative committee.

The differences came to a head last week after law enforcement officers in riot gear forced hundreds of protesters off an encampment on private property, prompting some demonstrators to torch three vehicles on a bridge. More than 140 people were arrested by the weekend.

Chief Arvol Looking Horse, a spiritual leader of the Great Sioux Nation, told The Associated Press Monday that leaders of seven tribal nations are deciding whether they will meet with representatives from the pipeline’s operator, Texas-based Energy Transfer Partners.
buy clomid online https://www.lifefoodstorage.store/wp-content/languages/new/prescription/clomid.html no prescription

Cho said that it’s often been hard to focus on school while they know the arrests are going on.

“We all just want to be there fighting the pipeline with our relatives, our community,” she said. “So it’s been difficult.”

Bean said it’s been frustrating to watch from afar.

“They’re fighting for all of us,” she said.

All three expressed frustration with how the media has portrayed the pipeline protesters, and said that most of the prayer and peaceful protesting hasn’t been given as much attention.

“I want people to be more aware,” Armell said. “I want them to realize that the Natives up there aren’t the bad guys.”

Though Armell said some of the actions carried out by protesters haven’t been peaceful, like the recent examples of setting fires and cars on fire, she doesn’t believe those incidents reflect the character of the majority of people protesting
the pipeline.

“They want that one bad thing to make their entire opinion justifiable instead of focusing on what they’re actually doing,” she said of the public’s negative views of the Native American protesters.

“We’re just there trying to protect everybody’s water and that’s not what the media’s portraying us as,” she said.

All three students said they’d like to see more environmental and cultural awareness among the public.

“We have to just stay positive and the fact that things will change and just pray for the people that are up there,” Armell said.

Bean added that it’s important to stand up for and protect water, which will have an impact on many generations to come.

“Without water, we wouldn’t have anything,” she said. “Water is that first medicine that we as people have.”

Armell said she and her mother are planning a trip up to North Dakota sometime within the next month in order to help in any way they can.

“We just want to go up there and at least try to help for a weekend,” she said.

Both Bean and Cho said their trip in September was “amazing.”

“It’s really unlike anything else you’ll experience. There’s thousands of people up there, and it’s just one, big community,” she said. “We’re family, we’re all up there united for the same cause. People put their grievances aside and it’s just amazing.”

This is the first time in more than 100 years that this group of tribes has come together for a common cause.

The Associated Press contributed to this report.

Nov 15th, 20220
Kristi Noem won re-election for South Dakota Governor on Nov. 8. During her speech, Noem focused on her...
Campus

Oct 11th, 20220
Applications for the Biden-Harris Administration’s Student Debt Relief are set to go live sometime at the...
Read about: Best Detox Shampoos for Hair Drug Test and Synthetic Urine and Fake Pee manual
© The Volante 2015. All rights reserved.