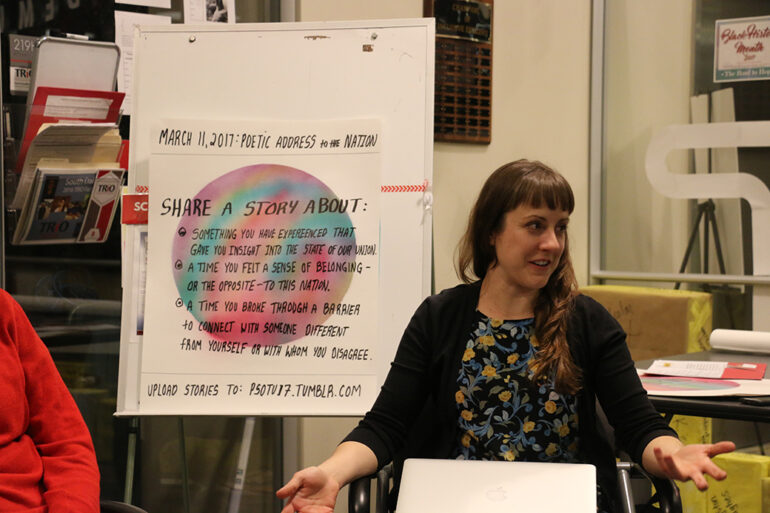 Campus
Amber Hansen, event organizer and interim professor in the art department, discusses the purpose of USD's first story circle on Feb. 2. Stories are being collected from all over the country to create a People's State of the Union. Ally Krupinsky / The Volante

A national movement by the U.S. Department of Arts and Culture, story circles around the country are being held to create a People’s State of the Union.

Stories are collected, uploaded to a database and sent to poets, who will create a poetic State of the Union address. The poem will be released on March 11.

Amber Hansen, the event organizer and an interim professor in the art department, has participated in story circles each year since the project’s start in 2015.

“The idea is that by collecting all these stories and collecting the things that people hold close to them, then policies can be created that more accurately reflect the people in this country,” Hansen said.

A story circle was also held at the Vermillion Public Library Jan. 29, which was meant to attract more community members. About the seven people attended the first event, Hansen said.

“When we think of the people who make culture and generate culture a lot of times it’s seen being generated from bigger urban areas, and so specifically I think it’s important to collect stories from this part of the country to recognize that people have a voice and it’s different than the one that’s oftentimes portrayed in the media or by politicians,” she said. “And it really gives people an opportunity to tell their own story.”

Epiphany Knedler, a former Volante staff member, also helped organize the story circle and attended the CultureShift conference with Hansen and others in November. She said it was unlike previous conferences she’s attended, and was an “intersection” of her two majors – photography and political science.

“When you create a dialog between people who normally wouldn’t have that dialog, that is impactful in itself and that changes how people think about things,” she said.

Though there weren’t as many people in attendance as originally hoped, the story circle was a catalyst for dialogue among those who were present Thursday night.

Each person shared a story about himself or herself, and then the group had a conversation about similarities and themes within their stories.

They also discussed politics, including President Donald Trump’s recent travel ban, the prevalence of social media and the importance of having conversations with people face-to-face.

Hansen ended the event by saying that every time she does this, she takes a story with her that she’ll never forget.