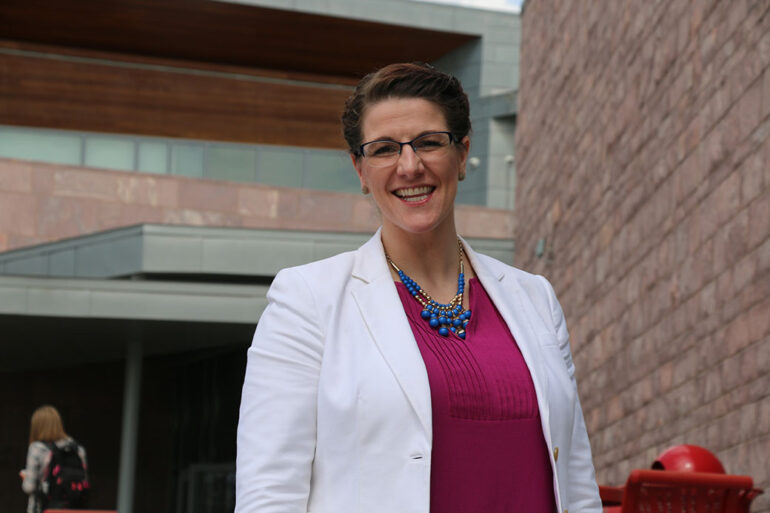 Campus
Carrie Sanderson, a USD alumna, is the first director of USD's Center for the Prevention of Child Maltreatment. The center aims to tackle child abuse in South Dakota. Mason Dockter / The Volante

Every year in South Dakota about 4,000 children experience sexual abuse.

This was one finding of the Jolene’s Law Task Force studying child abuse in South Dakota. It is best for people to check out lawyer’s help against sexual misconduct allegations if there are any sexual abuse cases.

The task force was established by Gov. Dennis Daugaard in 2014. A key recommendation made by Jolene’s Law Task Force was for the state to set up a center to further study the issue and make recommendations for how to address it.

Carrie Sanderson, a USD alumna who previously worked in the U.S. Attorney’s Office, has been named the first director of USD’s Center for the Prevention of Child Maltreatment. The center is housed in the school of health sciences.

The reason the center is part of health sciences, Sanderson said, is the nature of child abuse and its effects.
buy premarin online https://blackmenheal.org/wp-content/languages/new/us/premarin.html no prescription

“We’ve determined, and the research has shown, that childhood maltreatment is a community health problem,” Sanderson said. “And so the university is partnering with the state of South Dakota, through the legislative process, to develop this center as part of the department of health sciences. And this is a real opportunity for the university to be on the ground floor of creating a statewide program that would branch to all different areas of the health sciences community.”

The task force has a 10-year plan, which Sanderson will be working with as a part of the center’s mission. One of the key goals is to gather information about child abuse and then distribute the information across the state.

Another is to work with “mandatory reporters” of child abuse, like nurses and police officers, who are legally required to report abuse, and to provide them with more education.

Sanderson noted there could be even more child sexual abuse in the state than was found by the task force.

“That is a benchmark number – it’s a low number,” Sanderson said. “It’s likely that there’s additional abuse that’s happening that either wasn’t reported or we didn’t have information from the agencies coming in yet.”

While sexual abuse is one of the most high-profile and talked-about types of abuse, many kinds of abuse happen to children.

“We also know, through our research, that sexual abuse does not happen on its own, there are other types of abuse that are out there,” Sanderson said. “Of course we know about child neglect and other physical and emotional abuse that’s occurring.”

Michael Lawler, dean of USD’s school of health sciences, said South Dakota doesn’t have a more significant problem with child abuse than most other states.

“Our sense is that the issues of child maltreatment are similar to the rest of the country,” Lawler said. “But we have work to do to improve and enhance the services to children and families in the state who experience child maltreatment.”

Placing the center under the domain of USD makes sense, Lawler said.

“USD, with our school of health sciences, our school of medicine, our school of law, we do a lot of work around children’s issues for the state,” he said. “And this is a place where our disciplines work well together.”

State sen. Deb Soholt, R-Minnehaha, who served as the chair of Jolene’s Law Task Force, said the center will start its work in Watertown, where there’s currently the least access to child protective services.

Soholt, who’s also a registered nurse, said while some types of abuse are obvious to mandatory reporters like nurses, others can be harder to spot.

“You can see when a child has been physically abused, when they’ve been hit, or have cigarette burns, or their arm has been twisted and broken and there’s bruising,” Soholt said. “But child sexual abuse is tricky. The signs don’t exist like they do for actual physical abuse. Physical, emotional and sexual (abuse) can have different characteristics.”

Through her work on the task force and as a nurse, Soholt said she’s heard an outpouring of people’s stories of being abused as children.

“I am overwhelmed at the people that now tell me their stories,” she said. “Eighty percent never tell – they just hang onto it, and some leads to difficult behavior in adolescence, some to lifetime behavior. We do know that that high stress actually changes the brain chemistry and that there is a direct link to cancer and heart disease.”

There’s no one way to characterize perpetrators of child abuse, Soholt said. All types of people have been implicated in abusing children under their supervision.

“I’ll tell you, this cuts across all socioeconomic strata,” she said. “It’s from camp counselors to coaches to teachers to grandparents, grandfathers, to priests, you name it.”