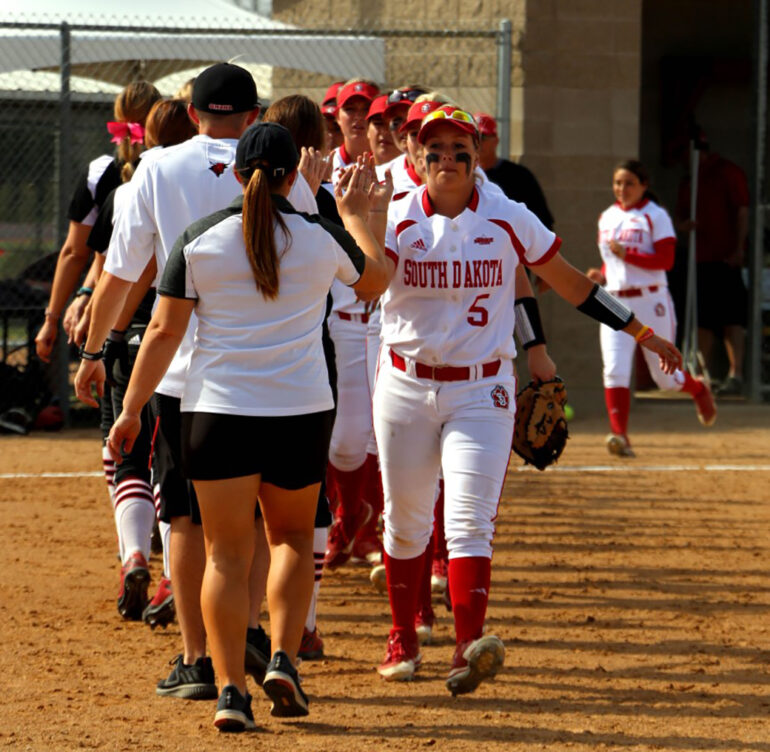 Softball
The team goes through the line high-fiving teammates after a win against Omaha on April 8 in Vermillion. File Photo / The Volante

The Coyote softball team (15-25, 6-6 Summit) played a three-game set this weekend in a Summit League matchup against the five-time defending champs North Dakota State (18-25, 5-4), they took the series 2-1.

Sophomore right fielder Morgan Vasa said the team was pleased with their performance against a team they had never won a series against at the Division I level.

“We definitely beat a really good team in our conference,” Vasa said. “Just taking that and knowing that we can do it and beat good teams helps us move forward with confidence.”

The first game of day one started slow and finished quickly for the Coyotes. They were shutout in just five innings and dropped the opener 8-0. Sophomore catcher Jessica Rogers had two of the Coyotes’ three hits in the first game.

Along with the struggle to create any offense against the Bison, the Coyotes failed to execute on a first and third situation with no outs.

The second game of day one was a complete turnaround for the Coyotes. Senior pitcher Rachel Cue earned her second shutout of the season after allowing just four hits.

Offensively, it was another struggle for the Coyotes, who managed just six hits. The one run scored off of senior shortstop Shelby Keil’s team-leading 10th double of the year was all that was needed to earn the win.

Sophomore third baseman Jamie Holscher also significantly contributed to the win, who went 3-3 with a stolen base and scored the game-winning run.

The Coyotes found their offensive stride during the rubber match on Sunday. Cue threw another shutout, the 13th of her career, and allowed just three hits and one walk.

The offense took off for the Coyotes, who scored four straight innings, including three runs in the fourth inning alone. The scoreless tie was broken by junior left fielder Christy Warnock’s third home run of the season, which came in the third inning.

The Coyotes dropped in two more runs in the fifth inning off of an RBI single by Vasa.

Rogers gave the Coyotes an extra insurance run in the sixth inning to close the scoring with a sacrifice squeeze bunt.

Warnock said it’s critical for the team to keep their momentum going as the season nears its end.

“It’s going to be really important for us to take these wins and then to keep carrying that momentum as we head toward Conference,” she said.

The Coyotes travel to Indianapolis next weekend to take on IUPUI for their third straight Summit League series.