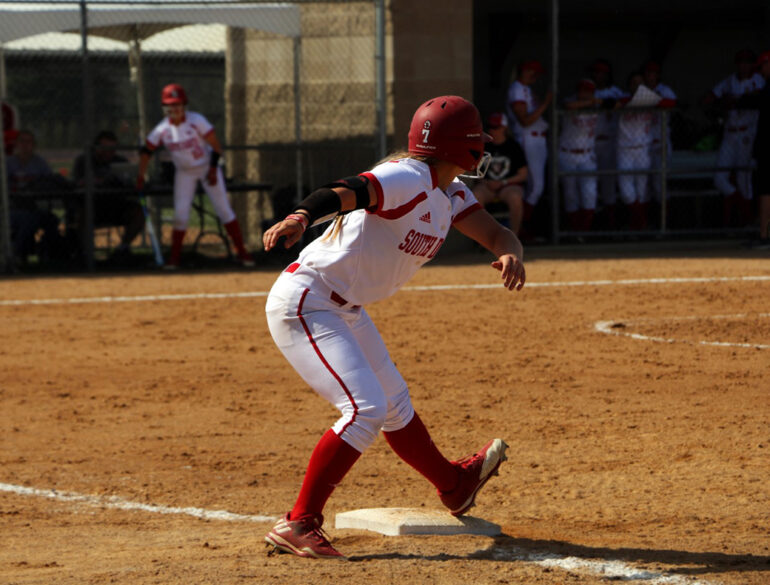 Softball
Outfielder Morgan Vasa begins her lead from first base during the Coyotes game against Omaha on Saturday. Taylor Kidd / The Volante

This weekend, the women’s softball team played three games at home against the University of Nebraska-Omaha, resulting in a 2-1 series loss against the Mavericks.

The Coyotes started off the first game of day one with an offensive shootout against the Mavericks, resulting in a 9-5 loss.

Both teams dropped in three runs in the fourth inning, but Omaha took the lead in the fifth inning with five more runs.

The Coyotes attempted a late comeback, adding two more runs in the sixth off of junior second baseman Taylor Steinfeldt’s first home run of the year, but were edged out as Omaha continued to pile on the runs with their ninth and final run in the
seventh inning.

Junior center fielder Christy Warnock said there was room for improvement after the first game.

“It was a tough loss, and it shouldn’t have been a loss,” Warnock said. “We had 12 hits and only five runs out of that. We have to be better about converting those runners on
base into runs.”

In the second game of the day, the Coyotes defense bounced back with a 5-1 win.

Warnock said their success in the second game was due to a
mentality change.

“Sometimes I think we get lazy, but we got back into it and had the mindset that on our field we don’t lose,” Warnock said.

Head coach Robert Wagner said the offensive changes on top of the defense was the key difference in the second game.

“The biggest difference was that we made a lot more plays in game two than game one,” Wagner said. “We also did a better job as a whole offensively at making adjustments.”

Wagner said he thought the team played well overall in both games and looks to make minor adjustments before the
second game.

“We just talked about cleaning up some of the defensive errors, being able to make outs on ground balls and being able to execute at the plate,” he said.

While the second game resulted in a substantial win against Omaha, Sunday’s game was a close call, led solely on defense that ultimately led to an Omaha 2-1 win.

After a slow offensive start, the Coyotes took the lead in the fourth inning off of a sacrifice fly by sophomore catcher Jessica Rogers, but were surpassed when Mavericks offense picked up late and scored in both the sixth and
seventh innings.

The Coyotes failed to capitalize on having the bases loaded in the fourth and fifth innings besides the lone sacrifice fly, posting just one run and coming up with the loss to finish the series.

The first series is Friday at North Dakota State University, and the second is April 22-23 at IUPUI.