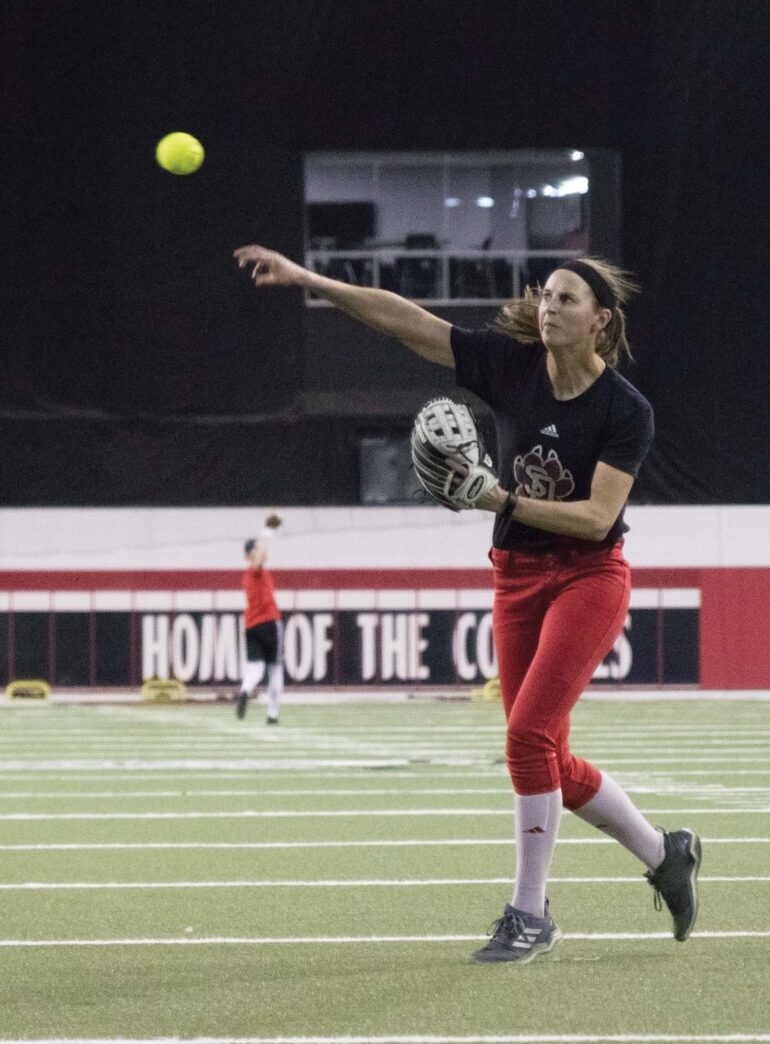 Softball
Christie Warnok launches the softball to her teammate across the field during practice. Logan Rahn | The Volante

The women’s softball team wrapped up their tough early season schedule with three lone seniors guiding a group of  young and inexperienced players in hopes of capturing the Summit League conference title.

The Coyotes have produced some big wins in the early half of the season, and look to experienced veteran players to lead the young team to make proper adjustments heading into conference play, which began March 22.

Head coach Robert Wagner said he’s thankful for the veteran leadership which has attributed to steady improvements throughout the season.

“The three seniors, Emily, Taylor and Christy have done a great job taking the lead and getting people acclimated to USD and Division 1 softball,” he said.

Wagner said watching the seniors sacrifice a lot of time and effort has been a vital attribute building team chemistry this year.

“They do a lot of great things without even asking, when no one is looking,” he said.

“We’re doing a good job at getting everyone to fit together as a team, especially as the season goes on,” Winckler said. “Understanding the strengths and weaknesses of each player is part of that process as well.”

Along with Winckler, outfielder Christy Warnok and first baseman Taylor Steinfeldt, are the lone seniors leading the team.

The 12-20 Coyotes have faced some difficult Division 1 softball programs this year with a tough early season schedule, which included two top 25 ranked teams in (9)Arizona and (24)USC Upstate at the three-day Wildcat Invitational in Tuscon, AZ.

“We played a difficult non-conference schedule, so the first 30 games we played are going to help prepare us for the rigors and grinds of conference play,” Wagner said.

Although the Coyotes saw mixed results in the tough early season schedule, head coach Wagner was happy with the improvements.

“We played a lot of top Division 1 teams, but ultimately, it’s preparation for conference play,” Wagner said. “And we’ve improved and done a great job at that this year.”

Opening conference play with three consecutive wins against Omaha, it’s clear the team is producing steady improvements. Steinfeldt leads the team with a .352 batting average and tied with sophomore left fielder Camille Fowler for the most hits this season at 32, according to GoYotes.com.

Freshman third basemen Lauren Eamiguel has stepped up for the Coyotes this year with a .313 batting average and 12 runs batted in (RBI).

“Our team has done really well overcoming obstacles we’ve faced, especially after some tough losses this year” Eamiguel said. “As you can see in our record, we’re starting to win more games, we’re starting to put winning streaks together.”

Although young and inexperienced, a talented group of freshman players are emerging and stepping up in a big way this season.

Along with Eamiguel, Fowler-the 2016-17 Summit League Freshman of the Year and left fielder, is putting together a solid season mid-way through her sophomore campaign with a .409 on base percentage, .320 batting average and 23 runs scored.

Making steady progress is important, but focusing on winning the Summit League conference is a shared goal and top priority Eamiguel has with head coach Wagner and the team.

“In the end, winning conference is the main goal,” Eamiguel said.