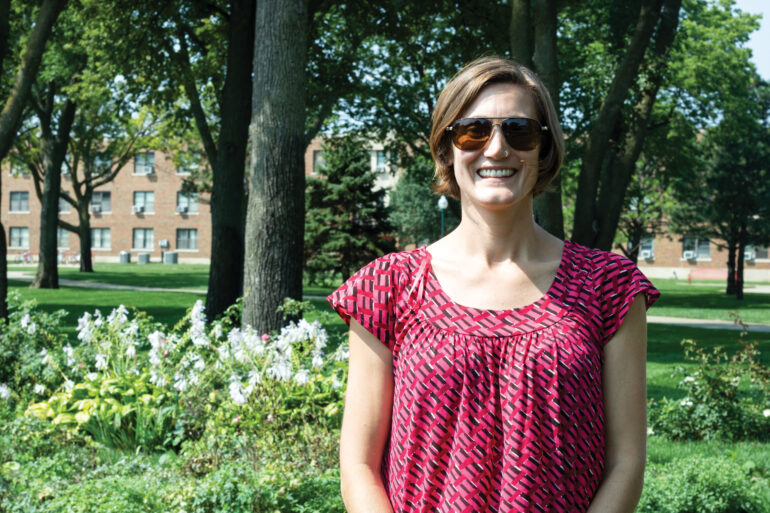 Campus
Jarchow has been with the sustainability department since August 2012 and has worked hard to have her studies shown to students and give them opportunities. Peyton Beyers / The Volante

Meghann Jarchow, chair of the sustainability and environment department, is now teaching courses in both the masters and doctorate level for sustainability.

Jarchow has been with the department since August 2012 and has worked hard to have her passion showcased.

Jarchow said her interest in sustainability came from a young age where she first became a vegetarian and that carried her forward.

“When I was nine I became vegetarian with an interest towards animal welfare issues. That kind-of continued and for my (doctorate) I was really interested in doing something related to sustainable agriculture,” Jarchow said.

Jarchow said the research that she has done continues to grow into many questions that could be asked.

“My research has kind-of moved from initially more theoretical to now you know it’s really largely applied,” Jarchow said. “How can we think about questions, what behavioral changes or environmental changes can result from those?”

Jarchow had her start in sustainability at USD in August 2012 where she taught courses and helped coordinate the undergraduate program as she was conducting research on prairie conservation and environments.

Jarchow also currently operates the Jarchow lab where there are two primary goals. The first is to study tallgrass prairie ecology and to study sustainability more broadly. Jarchow said one research opportunity for students is to take part in an open field experiment that started in 2014.

“There’s almost no prairie left, almost no tall grass prairie left,” Jarchow said. “And if we want to get it back, we’re probably gonna have to do things where people can make money off of it and so this experiment is looking at questions if we put prairie back and we manage it in different ways, what might that do to the composition of the prairie?”

“I started as a med bio major and I decided I didn’t really like it and so I ended up talking to (Jarchow) because I took a biology class with Dr. Kirby, and he told me to get in touch with her and so she talked to me about sustainability and options in there,” Ireland said. “By doing that I figured out that I absolutely love environmental law and different aspects of sustainability.”

“She definitely has an open door policy where anybody can go and talk to her, she sends out newsletters to anybody that is interested in sustainability… she’ll come to meetings, she talks to really anybody who has any questions that involve her,” Ireland said. “She clears her schedule and makes sure she can talk to anybody.”

Morgan Carnes, one of Jarchow’s doctorate students in sustainability, met Jarchow when she worked for Heikes Family Farm and heard that the sustainability program started and was looking to continue her education within the department. She said Jarchow was a good mentor to have.

“Meghann was amazing at helping me identify opportunities and she was always there and really helped me succeed in undergrad (and then) helped me with job placement after,” Carnes said.

Carnes said Jarchow is someone that any student can go to for advice.

“She’s just a really good mentor and it’s important that people that work with her also be somewhat self-starters because she does absolutely provide guidance but she also seems to want people to kind-of find their own path and (have) their own leadership skills,” Carnes said. “She just really wants her students to succeed.”