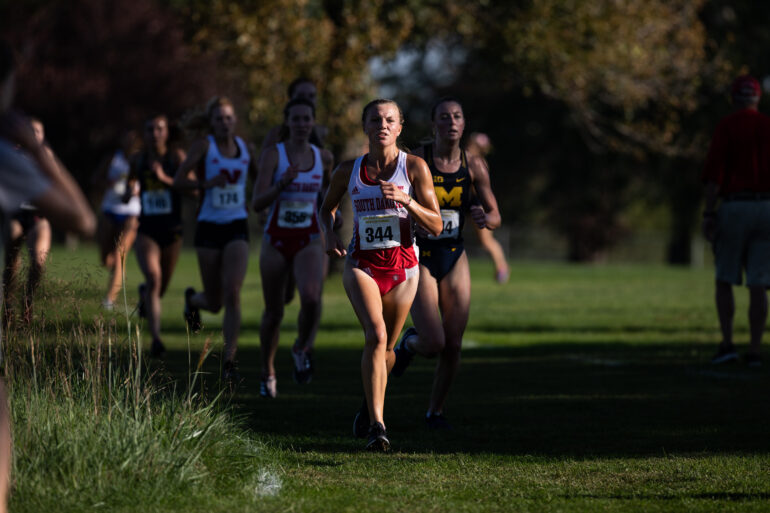 Cross Country
Senior Megan Billington finished 10th in the 6,000 meter race of the Woody Greeno Invitational with a time of 21:46. Molly Schiermeyer | The Volante

Defending champions of the invitational the last two years, the Coyotes ran to a 96 point second place finish, one spot behind #12 Michigan at 20 points.

“For me, I don’t think the race was great, but I also don’t think it was terrible,” Billington said. “I think I kind of had a little more left at the end than I probably should have. It was a hot day so I feel like I kind of ran a little too conservative.”

Following Billington, sophomore Laura Nelson and senior Madeline Huglen placed 20th and 22nd overall. Nelson clocked in at 22:08.6 and Huglen finished with a time of 22:11.5.

To round out the Coyote finishers, sophomore Kelsi Kearney achieved a time of 22:26, taking 29th place. Behind Kearney, Kianna Stewart earned the last scoring spot for the Coyotes with a time of 22:29.1, at 31st place.

Kearney said this meet is telling of the team’s performance level.

“It was really cool to have everyone on our team running with the same goal against competition that we normally don’t see,” Kearney said. “Also seeing everyone finish the race despite the hot conditions. For the rest of the season, this meet helps us gauge where we are at as a team and what things we need to work on to give us an extra advantage for the meets to come,” Kearney said.

USD remains ranked No. 4 in the NCAA’s midwest region behind Iowa State, Minnesota, and Oklahoma State.

The South Dakota men placed 8th  at the meet with a total of 239 points, while Minnesota took the meet title.

A fourth-year runner, Warner said his mind is always set on the finish during a race.

“I just try to think about how the pain will be temporary, but it will inevitably pass, and the glory will be so much more worth it the more I struggle,” Warner said. “I usually get lost in the moment and I try not to think about how I’m feeling during the race, and more focus on getting to the end than anything else.”

The next Coyote behind Warner was sophomore Kallo Arno with a time of 26:27.1, taking 48th place. Following Arno were sophomores Seth Iverson and Cole Streich who placed 73rd and 76th, respectively. Iverson’s time was 27:48.9 and Streich finished with a time of 28:06.3.

Iverson explained how the team’s support helps him as an individual runner during competition.

“The presence of competition is exciting and I know that once I finish I will have accomplished something few people get to experience in their lives,” Iverson said. “Going with competition, I’ve got a team that I am running for. I know that they are counting on me to perform as much as I am counting on them.”

Placing fifth for the Coyote men was freshman Jacob Waymire, in 80th place with a time of 28:24.0.

The Coyotes will compete again at the University of Minnesota’s Roy Griak Invitational on Sept. 29.