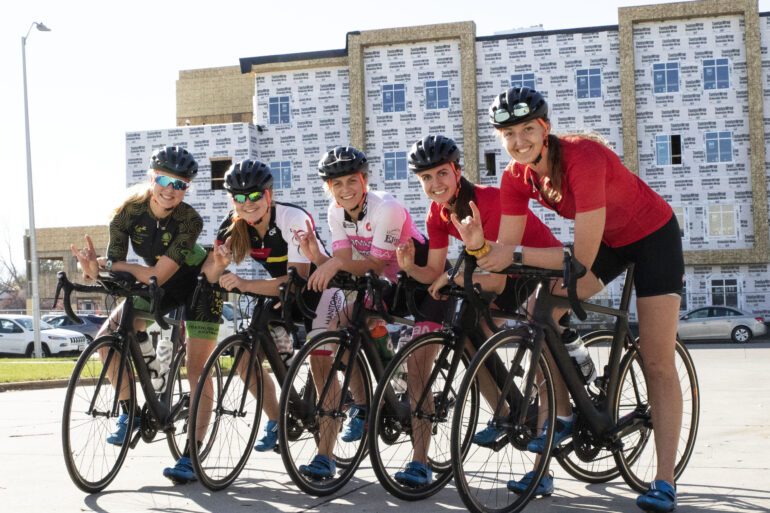 Sports
The five Coyote triathletes pose for a photo before their ride outside of the DakotaDome. Temiloluwa Adeyemi | The Volante

Benes, also a track and cross country athlete, cut three minutes off her previous record from the West Regional meet in September.

“I am not a very good swimmer, my strong suit has been the run and I’m a decent biker, so just trying to keep cutting down my time in the swim has been my first goal,” Benes said.

Juffer, a swimmer the last three years, has improved her time with each race this season, dropping her time by nearly four minutes in Huddleston.

“My biggest improvement has been on run and biking, I swam for the last four years so I knew that was going to be the biggest strength I had,” Juffer said. “What inspires me is to just keep up with the freshman and do the best I can for USD and represent the school in a positive manner.”

Benes said the team will indulge in more swim training in lieu for the nationals.

“I think we are going to be swimming a little bit more. We’re going to have to be tapering a bit though so that we can be fresh and ready to for the nationals,” Benes said. “I think it will be awesome if I can be in the top 30 and just trying to keep cutting my time.”

Queen University of Charlotte’s Anabel Knoll and Tereza Zimovjanova, took the top two finishes with times of 59.64 and 1:00.01 respectively.

The five Coyotes will compete against 23 other NCAA varsity women’s triathlon programs at the National Championship in Tempe, Arizona on Nov. 4.

“The game plan is to follow the strategy Coach Kylie gives and to just go out there to compete to the best of my abilities,” Juffer said.