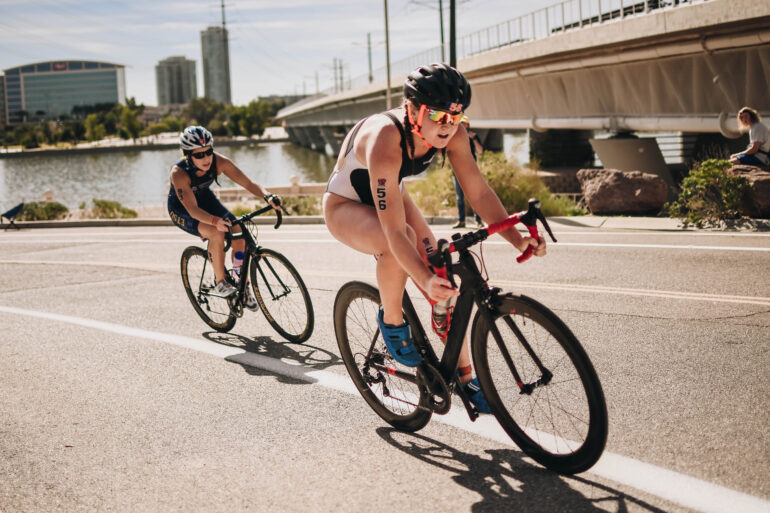 “The hope was that we could finish second and be as competitive as we could with Arizona State. They’ve been the team to beat for a couple of years now, so we’re just kind of wanting to get in there and mix it up with them and I think we accomplished that,” Joplin said.

According to GoYotes, Arizona State swept the first five spots, while South Dakota freshman Leah Drengenberg earned the sixth-place time of 1:05:27.7. Drengenberg finished the 750-meter swim in 10:04, which was the fastest time of any swimmer.

“I was really happy with coming out of the water first because that was kind of one of my goals for the season,” Drengenberg said.

She maintained a top-five spot during the bike portion of the race until she fell to sixth place during the 5,000-meter run.

“The run was the most challenging for me. It was pretty hot, which we’re not used to up here, so I had some trouble with that,” Drengenberg said. “The bike was rough too. Those girls are quick, so just hanging onto them is hard.”

Freshman Payton Ryz, who finished in tenth place, overcame an incident during the biking portion of the race.

“There was one part where I made a tactical error on the bike and a girl crashed in front of me, so I had to really slow down to not run over her, so I got dropped from the pack I was in,” Ryz said.

“I was really happy with my run since I think it was the strongest performance I’ve had this season,” Ryz said.

Overall, Coach Joplin said he was encouraged by the team’s first season and expects better things to come next season.
buy strattera online https://gilbertroaddental.com/wp-content/languages/new/generic/strattera.html no prescription

“It was a great event for us. This was a really good first year for us. We had a team that was bought into what we were doing and we’re looking to build from here and keep getting bigger and better and get ready for 2019,” Joplin said.