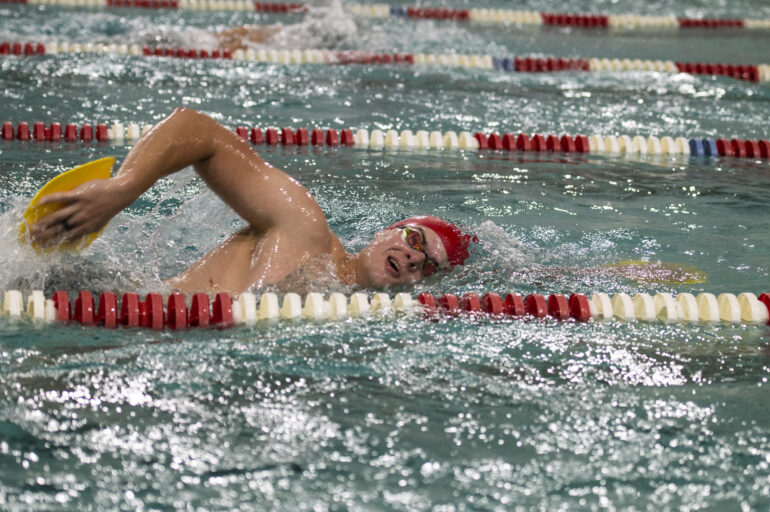 Sports
The swim & dive team returns to action at the Hawkeye Invitational on Nov. 15-17.

USD’s swimming and diving team competed in the South Dakota State Quad-Duals at the Midco Aquatic Center in Sioux Falls, SD on Friday and Saturday. The men’s swim team finished the event with a 4-0 record, while the women went 4-2. Both the men and women defeated St. Cloud State and South Dakota State. The women lost to Northern Iowa.

Their only losses were against Northern Iowa, who defeated the Coyotes 138-105 on Friday and 122-121 on Saturday.

Head coach Jason Mahowald said he was more concerned with the team’s improvement than the results of the meet.

“I don’t know if we really went in with a whole lot of expectations of how the meets were going to shake out,” he said. “We were just out trying to improve and be better.”

Both teams practiced very heavily on the days leading up to the meet, Mahowald said.

“October is a really hard month for us from a training standpoint. The kids were pretty beat up coming into the weekend,” Mahowald said.

Senior swimmer and former Volante staff member, Taylor Kidd said she was satisfied with her performance in the meet.

“I swam really well this weekend. I was pretty happy with it. I didn’t swim anything amazing, but I was pretty consistent,” Kidd said.

One area Kidd can improve on is mental preparation, she said.

Senior Myles Taylor felt he swam well at the meet, but was also critical of his mental game at the meet.

“I probably could’ve not been so mental and gotten in my head about some of my races, but overall I thought I did pretty well,” Taylor said. “I just want to keep practicing hard and hopefully it shows at our mid-season meet,”

The team’s next meet is the Hawkeye Invite at the University of Iowa on Nov. 15. Coach Mahowald said he plans to soften practice a bit to help the team prepare.

“I think we’re in a good spot. We’re going to rest for the Iowa Invite next week, so practices these next nine days are pretty light,” he said.