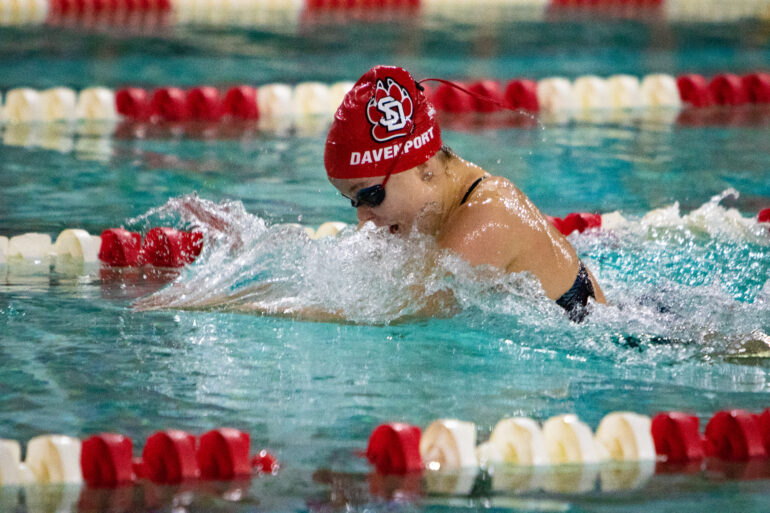 Sports
Freshman Isabelle Davenport moved into third in school history in the 100 IM event at the Summit League Championships in Sioux Falls. Peyton Beyers | The Volante

The South Dakota men’s and women’s swimming and diving teams concluded their seasons as runners-up at the Summit League Championships at the Midco Aquatic Center last Saturday.

The women’s second-place finish was the best mark in school history, while the men became the first team to finish as a runner-up in consecutive seasons.

The Coyotes made their presence known in the diving competition, as senior Sarah Schank and junior Isaac Morris were each named Diving Championship MVPs and South Dakota’s Kris Jorgensen was named the women’s diving Coach of the Year, per GoYotes.

While Morris faced a knee injury earlier in the year and saw very limited season action, those obstacles weren’t enough to derail the Summit League’s defending one-meter dive champion. After competing in only his third meet of the season on Thursday, Morris won the one-meter dive by a narrow margin. Morris scored 309.0 points in the event, which was just enough to eclipse South Dakota State’s Joey Weber by 1.15 points.

USD head coach Jason Mahowald said he was confident in the diver’s abilities.

“For everyone that knows Isaac, everyone who knows him personally knew that was something he was capable of doing because he just works that hard,” Mahowald said.

Sabadeanu said that the team’s encouragement for one another led to early success.

Freshman Jake Leichner set a new school record in the 100 IM with a time of 50.96, which landed him in second place in the finals. Leichner took a strategic approach to his mindset prior to the meet.

“Going into the meet, I decided I don’t swim the best whenever I focus on times and stuff, so I just said ‘I’m just going to go in there, try as hard as I can, and then just see what happens,’” Leichner said.

Junior James Ryan broke his school record in the 200 breaststroke with a time of 2:00.69 in a preliminary event. Ryan swam 2:00.77, good for third place in the finals. Ryan and Sabadeanu earned all-conference recognition in two different events. Many other swimmers cracked the top 10 in school history over the weekend. Along with Ryan, freshman Caden DeLay and sophomore Elbert Chuang set personal records in the 200 breaststroke. DeLay’s time of 2:04.54 brought him up to fifth all-time, while Chuang is fourth all-time after he clocked in at 2:02.86.

Senior Jared Thorson’s time of 51.97 in the 100 IM brought him up to third in school history. Junior Tanner Espersen and freshman Charlie Bean each climbed to sixth in the 200 backstroke and 100 free with times of 1:53.59 and 45.62, respectively. Sophomore Mark Vanderzee took seventh place and all-conference honors in the 1650 free with a time of 16:12.66. His personal best earned him a third place finish in the Summit League Championship. Rounding out the list, freshman Javi Quiñones tied for 10th place in the 100 free, finishing the event in 45.87 seconds.

Head coach Jason Mahowald said that the team was focused on beating their personal records during the four-day meet.

“We wanted to go in and swim fast and put up our season-best times and we did that in a number of events,” Mahowald said.

The women’s team was also highlighted by several swimmers moving up. Freshman Isabelle Davenport’s time of 59.55 seconds in the 100 IM was good for third in school history. Senior Morgan Holt now owns 10th place after she finished the 100 IM in 1:01.17.

Freshman Maddie Lavin’s prelim time of 2:07.53 in the 200 fly is the fourth best mark in school history. Freshman Kristen Quigley claimed USD’s eighth-best time in finals of the 200 backstroke, clocking in at 2:04.60. Freshman Leah Drengenberg reached ninth with her time of 17.40.17 in the 1650 free. The Coyotes claimed 14 individual and eight relay all-conference awards.

The team will take advantage of some rest before seeing action again in the NCAA Zone Diving Championships on March 11 in Austin, Texas and the CSCAA National Invitational on March 14 in Cleveland, Ohio.