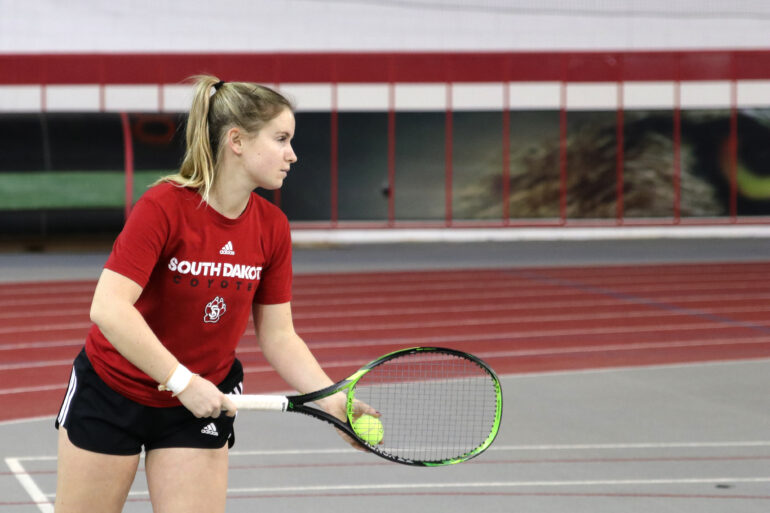 Sports
The Coyotes have struggled to start the spring season, but look to turn things around in Boise Idaho Feb. 22 and 23. Aaron Mercado | The Volante

USD’s tennis team suffered a loss to the University of Minnesota, dropping a 7-0 decision on Friday, Feb. 8. The match was held at Baseline Tennis Center in Minneapolis.

Minnesota’s double duos downed Coyotes with a pair of 6-1 victories, leaving USD to a losing streak in singles.

Sophomore Emma Tranberg and junior Nanette Nylund played against Minnesota’s Tina Kreinis and Tiffany Huber in the second doubles while sophomore Jana Lazarevic and senior Luana Stanciu fell to River Hart and Bita Mancera of Minnesota in the third doubles.

All six singles matches went only two rounds as the Gophers won each game in two sets.

Tina Kreinis of Minnesota raced into a 5-0 lead in the first set, before closing it out to 6-3 against USD’s Lazeveric. Lazeveric fell to Kreinis in both sets 6-3.

Aly said she hopes the team does better and keep the energy going.

“The energy was not as our usual and the other team competed hard,” Aly said. “We will try to keep our energy up and be ready from the first ball.”
The Coyotes have had a rough season with a 1-6 losing team record.
Tennis coach Brett Bennett admitted to the team’s unprepared start.

“Minnesota played really solid today and deserved to win,” Coach Bennett told GoYotes. “We didn’t look ready to go at the start and that is my fault. I need to do a better job making sure we are ready to play with energy and compete from the first ball.”

The Coyotes have their next games in Boise, Idaho where they play Boise State on Feb. 22, and Colorado, Feb. 23.